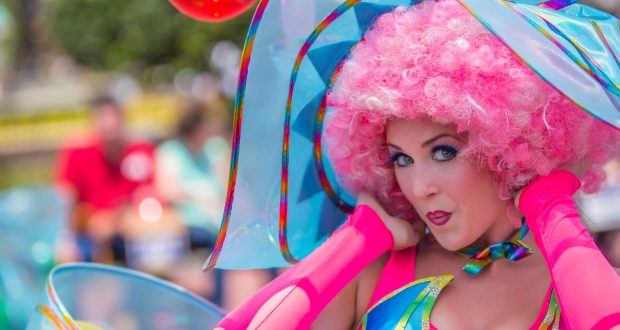 Do You Know These 6 Secrets About Cast Members At Walt Disney World?

Walt Disney World is considered to be the “most magical place on Earth”. It takes people to make the magic possible, and currently there are over 60,000 of them who work hard to make your vacation special. Walt Disney World employees are called “Cast Members”. It is not an easy job, but it can be extremely rewarding. If there is a Cast Member who makes your day, stop by Guest Relations or email Disney and leave a compliment. Disney takes such praise quite seriously. Here are six secrets that you might not know about Walt Disney World Cast Members.

The next time you park your car at Walt Disney World or you ask a Cast Member for directions to the nearest restroom, watch how he or she points. Cast Members are not allowed to point with one finger, as is the norm in the United States. Instead, they will point with an open palm and two fingers. This is because pointing with one finger is a rude gesture in some parts of the world, and Disney doesn’t want to risk offending anyone. It is also easier to see. Occasionally you will see someone point with just one finger out of habit. When Disney notices, that Cast Member will be reminded of the proper way to point while at work.

Walt Disney World is supposed to be a happy place, but sometimes some not so pleasant things will happen. There are codes to deal with these situations, so people who might happen to hear will not know what is going on. For instance, “Code V” stands for “vomit”. If a child has been found, the code “Signal 70” is used in front of the child to keep him or her calm. “White Powder Alert” means that someone has scattered cremated remains on a ride or in an area. (It does happen, and no, the loved one will not have a proper send off. The ride will be shut down and the remains vacuumed and thrown out.) Not all codes are official. If a Cast Member tells you to “have a Disney day”, it is usually meant sarcastically because he or she is annoyed with you for some reason.

The behind the scenes Cast Member only areas are known as “backstage”. If you are lucky enough to have a Cast Member on your favorite social media site, you will no doubt see lots of ride photos or pictures in front of Cinderella Castle. What you won’t see are pictures of the backstage areas. Taking such pictures is strictly forbidden.

Cast Members need to stay in character at all times while wearing the uniform. Of course that is expected if someone is playing a face character. Cinderella is not going to know anything about Freddie Kruger, for example. It goes far beyond that, though. Cast Members are not allowed to frown, even if they are having a bad day. Someone who works on Jungle Cruise is going to be more open to joking around than someone who works at Haunted Mansion. Staying in character is a way to keep the illusions going.

There are strict regulations on how Cast Members are to look. Just a few years ago men were not allowed to have facial hair. That restriction has been lifted, but there are guidelines for what the facial hair can look like. Hair must be worn short and not cover the ears or the collar. There are pictures on the Disney Careers website of what is and is not acceptable. Women also have restrictions. No “extreme hairstyles” are allowed, including a female shaving her head. If hair is dyed it must be a natural color. Fingernails need to be kept fairly short and if polished they must be a neutral color. There are also guidelines for men and women on jewelry. Visible tattoos are not allowed for anyone. If you see someone working at Walt Disney World that does not meet these requirements, the store or restaurant is probably not owned by Disney.

Sometimes Disney creates magic for Cast Members as well. It starts the first day of work, and it is known as Traditions. It is much more than average orientation. Cast Members will learn the history of Disney, behind the scenes secrets, trivia, and more. There are plenty of fun surprises along the way. One nice thing about Traditions is that it is an equalizer. It doesn’t matter if you have been hired as a Vice President or if you’ll be changing light bulbs at night, you will attend Traditions together, and on the same level. Many Cast Members will tell you that Traditions was one of the best parts about joining the Disney team.