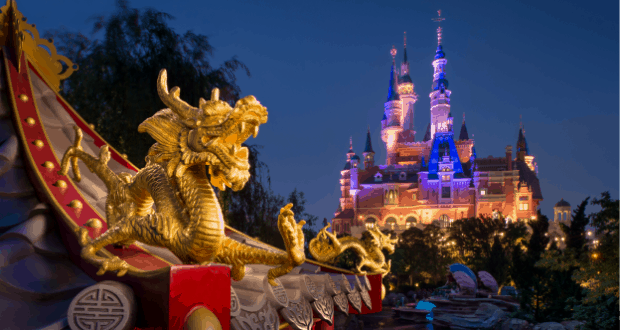 Disney’s Behind the Camera Series: That Perfect Picture from Shanghai Disneyland

Who’s ready for another look behind the camera with DisneyParksBlog’s “Behind the Camera Series”? This captivating photo was captured Kent Phillips, Photographer, Yellow Shoes Creative Group. Read his story below as he shares the magic behind this stunning photo!

As finishing touches were being put on Shanghai Disneyland shortly before its grand opening in 2016, I was lucky enough to spend more than a month at the park taking photos of attractions, restaurants and merchandise locations. In my almost 20 years as a photographer with The Walt Disney Company, I’ve been privileged to take photos all over the world, but this was the very first time I was part of “opening” a new park. It was even more exciting because it was the company’s first park in mainland China.

Bob Iger famously described the Shanghai Disneyland as “authentically Disney and distinctly Chinese,” and I spent a long time looking for just the right image to capture the essence of that statement. The photo needed to blend Disney magic and China’s cultural spirit. To me, Enchanted Storybook Castle, with its celebration of all the Disney princesses, is the park’s centerpiece and a natural to represent Disney. So I kept walking in circles around the castle looking for a frame that included the castle and just the right piece of Chinese décor. Turns out, what I was looking for didn’t require any walking at all.

One day I took a trip on Voyage to the Crystal Grotto, the enchanting boat ride near the castle that includes scenes of characters from beloved Disney films. I was in the boat to take photos of the attraction, but I ended up finding the image I’d been searching for all this time.

As my boat rounded a bend in the river and we passed Mulan, I looked up and … there was the picture I was looking for. The beautiful golden dragon you see here was framed up perfectly with the castle in the background – and the lighting was just perfect. Of the thousands of pictures I took during my time in Shanghai, this one felt like it had the most “pixie dust” on it, given how it seemed to magically appear before my eyes.

Disney Cruise Line christens its newest ship, but the brand-new boat was hardly the focus on the ceremony