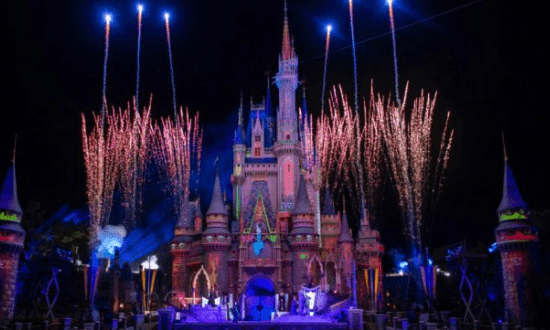 Disney After Hours is a special ticketed event that allows a small number of guests to visit the park in question for three hours after it has closed to the general public. It is held on select dates at all of the Walt Disney World theme parks except for Epcot. This summer at the Magic Kingdom, Disney has put a different spin on the fun. For ten nights only they are holding Disney Villains After Hours.

I attended Disney Villains After Hours on the opening night, and when I was invited by Disney to return with some friends I jumped at the opportunity. I’d like to thank Disney for hosting us, we had a fantastic time. We attended the event on Thursday, July 18.

With all of the Disney After Hours events, a limited number of tickets are sold. That means that there are shorter wait times for all of your favorite rides. Even though the event does not begin until 10:00pm, you can enter the park starting at 7:00 with your special event ticket. That gives your six hours total in the park. If you watch the last show of the evening you can stay even longer.

There are some special enhancements for Disney Villains After Hours. Live actors are part of Pirates of the Caribbean. Space Mountain is also different. The lights are turned all the way off. There is a special “eerie” soundtrack, and from time to time there is an evil laugh thrown in for fun.

Unlike the other Disney After Hours events, there are a few additions for Disney Villains After Hours. There is a stage show in front of Cinderella Castle. It’s called Villains Unite the Night, and it features many of your favorite Disney baddies. Another fun extra is Maleficent. She will make the rounds several times a night, breathing fire as she passes by her adoring fans. You can find the times for both the show and Maleficent in your combination map and Times Guide.

Make sure that you look up at the train station on Main Street, U.S.A. right after you enter the park, and then again before you leave. You will find several villains hanging out there, taunting the people below. The villains will change throughout the night, so stop by more than once. There are no meet and greet opportunities during Disney Villains After Hours, so this is your best chance to interact with some of your favorites.

Another fun extra with Disney Villains After Hours is that popcorn, ice cream novelties, and soda or water are included in the price of your ticket. There are plenty of stands throughout the park. All that you need to do is to show your wristband, and let the Cast Member know what you’d like.

If you’d like more than just ice cream and popcorn to eat, there are also some themed foods available for purchase. Enjoy Evil Emperor Zurg’s Noodles, Not-So-Poison Apple Cupcakes, and other fiendish treats. All items and their locations can be found in your guide when you enter. You can purchase special Disney Villains After Hours merchandise as well.

Most of the major rides are open during Disney Villains After Hours. We were able to ride Big Thunder Mountain Railroad, Space Mountain, Seven Dwarfs Mine Train, and many other of my favorites. It’s always nice to not have to wait in a long line to ride some of the best rides at Walt Disney World.

Disney Villains After Hours runs on Thursday evenings from 10:00pm until 1:00am. The cost is $139 per ticket, plus tax. The price for ages three through nine is the same. There is a discount for Annual Passholders and Disney Vacation Club members. If you are interested in attending this fun event, you had better hurry. That last date for Disney Villains After Hours is August 8.