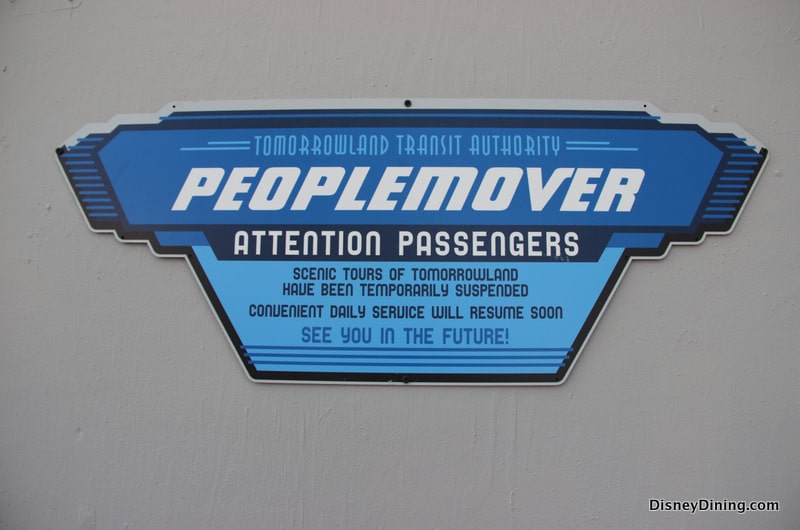 Jaime Gentile and Jackie Hurley from south Florida have filed a lawsuit against Disney after injuries that occurred while riding the Tomorrowland Transit Authority PeopleMover at Magic Kingdom in Walt Disney World in 2015.  The sisters were riding the attraction when two cars collided into each other causing injuries that sent them to the hospital in an ambulance to seek medical attention.  They are being represented by Jeff Delman who claims that Gentile suffered a jaw injury and Hurley suffered injuries to the neck and spine.  Both women required surgery to correct the injuries.  The lawsuit is for an amount that is greater than $15,000.

Currently there has been no public response from Disney on the lawsuit. The PeopleMover is an extremely slow-moving attraction that you wouldn’t typically associate with the possibility of an injury, or with great likelihood that there would be a collision between the vehicles.  As we learn more about the outcome of this lawsuit, we will provide updates here.

Check out our article called 8 Rookie Mistakes People Make at the Magic Kingdom Below!

While Disney veterans will picture personal favorites when thinking about Walt Disney World, Disney rookies will usually envision the Magic Kingdom. Cinderella Castle is one of Disney’s most recognizable icons, and rookies dream of the moment when they will see it for the first time. If you’ve never visited the park, it’s all too easy to make mistakes that will cost you time. Here are eight mistakes to avoid if you’ve never been to the most popular theme park in the world.

8. Not Learning the Park’s Layout

Many rookies do not realize exactly how big the Magic Kingdom is. They also do not know how easy it is to get from one land to another; if they’ve learned how to do it. If you’ve never been to Walt Disney World, go online and study the maps of all the parks, especially the Magic Kingdom. Don’t assume that you’ll figure it out once you arrive. If you have a general idea of what is where and how to get there, you’ll save valuable time.

7. Not Using the App

The My Disney Experience App is a great tool for a day in the Magic Kingdom. You will be able to check Wait Times, read menus, make or change reservations, find characters, see your pictures, and more. You can even use the app to find the closest bathroom. The My Disney Experience App is free, and you will use it a lot. One thing that rookies may not know is that it is a bit of a battery drainer, so close it when you’re not using it.

FastPass+ is a free tool that will allow you to skip the standby lines for up to three attractions per day. If you’re staying at a Walt Disney World hotel you can make your reservations 60 days in advance, it’s 30 days for everyone else. Don’t put it off, because reservations for the most popular rides can go fast. At the Magic Kingdom the most important FastPass+ reservation is probably for Seven Dwarfs Mine Train, those spots will be gone quickly. Peter Pan’s Flight is another ride that will often run out well in advance. Once you’re at the park and you’ve used all three of your selections, use the My Disney Experience App to make a fourth. You may not get something for the most popular rides, but it will be one less line that you need to wait in.

Everyone knows about Space Mountain and Splash Mountain, and those rides will have long waits. If the Magic Kingdom is crowded, spend some time experiencing the “less popular” attractions. Many days you can ride Prince Charming Regal Carrousel, Walt Disney’s Carousel of Progress, and Tomorrowland Transit Authority PeopleMover in the same amount of time that you would wait in line to get on Space Mountain. If you’re looking for characters, head to the Storybook Circus section of Fantasyland. Pete’s Silly Sideshow features Goofy, Donald, Minnie, and Daisy, and the lines are usually a lot shorter than the line to meet Mickey at the front of the park.

A day at the Magic Kingdom will take a lot out of anyone, and it’s easy to decide to leave immediately after Wishes Nighttime Spectacular. If you want to see a little extra magic, hang back once the crowds start to thin out. Pick up some souvenirs or enjoy one last Mickey pretzel. Half an hour after the official close time there’s a treat that even some veterans don’t know about. It’s known as the Kiss Goodnight. There’s special lighting on Cinderella Castle, and music plays. An announcement is made, which thanks guests for visiting and wishes them a safe trip home. It’s a polite way of reminding everyone that the Magic Kingdom is closed and that it’s time to leave, but it’s also filled with pixie dust.

The Magic Kingdom opens each day with style. Magic Kingdom Welcome Show is a must-see for Walt Disney World rookies. Mickey and the gang will ride in on the Walt Disney World Railroad and welcome the guests waiting below. It is made to get you excited for the day, and it will do just that! An added bonus is that you will then be able to enjoy the park when it will be least crowded, so once you’re in head to a popular ride that you don’t have a FastPass+ reservation for. The Magic Kingdom Welcome Show takes place about ten minutes before the park opens for the day. If there is an Extra Magic Hour the show will be held before that, not before it opens to the general public.

A vacation is supposed to be relaxing, but unfortunately Walt Disney World rookies will often put too much pressure on themselves, and the trip will become stressful instead. Don’t allow that to happen. You’re at The Most Magical Place on Earth! If the lines are long, enjoy the interactive queues. If you’re hot, ask for free ice water. If you get tired, watch Monsters Inc, Laugh Floor and sit down for a little while. If your kids want to wait 45 minutes to meet Mickey, do it. You will cherish those pictures for a lifetime. Enjoy your rookie day at the Magic Kingdom, instead of letting stress get the better of you.