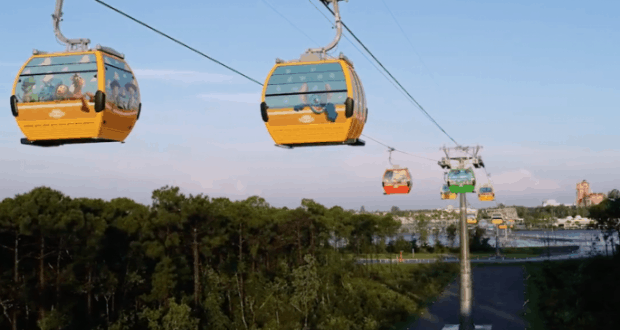 The Disney Skyliner at Walt Disney World recently opened to guests for the first time on September 29th, 2019. As with anything, there are always kinks and issues that arise with new openings and it looks like Walt Disney World experienced this over the weekend with Disney Skyliner. Guests were reporting a pile up of the gondolas at the Disney’s Riviera Resort station on social media. There were also gondolas that were stalled and ended up getting evacuated by Reedy Creek Fire Department. We haven’t heard of any reported injuries from the event. Of course, Disney will take this very seriously. Disney Skyliner is not open to guests today and there currently has not been a re-opening date confirmed by Disney. We haven’t heard anything official about happened with Disney Skyliner and what caused the pile-up.

If you aren’t familiar with Disney Skyliner, it is the new gondola system at Walt Disney World. The gondolas also feature characters from popular Disney movies and attractions. It connects Epcot, Disney’s Hollywood Studios, Disney’s Art of Animation Resort, Disney’s Pop Century Resort, Disney’s Caribbean Beach Resort and Disney’s Riviera Resort. Each of the cabins can accommodate up to 10 guests, including guests traveling with wheelchairs and other devices.

As always, we we will keep you posted on anything else we learn to help you plan your Walt Disney World trip, accordingly.

2019-10-06
Christy Caby
Previous: Check Out Nightmare Before Christmas Wishables at Walt Disney World and Disneyland
Next: What’s on the Horizon for Disney Cruise Line