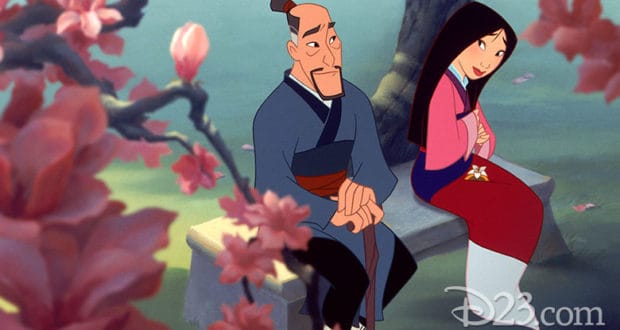 With Father’s Day right around the corner, D23.com is sharing some of their favorite words of wisdom from Disney Dads. From Zeus to Goofy to Fa Zhou in Mulan, the Fathers in Disney films are never short on advice. Happy Father’s Day to all the Dads out there!

As we grow up, it’s easy to sometimes feel smothered by our parents or that we’ve outgrown them—Max certainly thinks feels this way when his dad, Goofy, drags him on a road trip when Max would rather be with his friends. But Goofy soon reminds him that no matter how old or big Max gets, he’ll always be his son, and will love him no matter what.

2. “Just promise your daddy one thing. That you’ll never, ever, lose sight of what’s really important.” Tiana’s dad, James, The Princess and the Frog (2009)

Tiana gave up quite a bit in her life in order to chase her dream of owning her own restaurant, partially to honor her father who had the same dream but never achieved it. She soon realizes, however, that while her dad didn’t always get what he wanted, he always had what he needed. It reminds her to appreciate the important things in her life, such as her friends and her family.

3. “You’re mad, bonkers, off your head. But I’ll tell you a secret—all the best people are.” Alice’s father, Charles Kingsleigh, Alice in Wonderland (2010)

When Alice wanted to tell people about her trip to Wonderland, she worried they’d think she was crazy. Her father, though, assured her that what some people would call crazy, others might consider genius. He himself was finding profitable trading routes all over the world even though everyone told him it couldn’t be done. Charles encourages his daughter to stay true to herself, no matter what anyone else might say.

4. “Amelia, courage is not the absence of fear, but rather the judgment… …that something else is more important than fear.” Philippe Renaldi, The Princess Diaries (2001)

While weighing whether or not to accept her role as princess of Genovia, Mia almost lets her fear of public speaking convince her to flee. She then finds a letter from her father that reminds her that being afraid is not a bad thing, just as long as you do not let it control you. She takes her father’s advice and gladly accepts her new role.

5. “For a true hero isn’t measured by the size of his strength, but by the strength of his heart.” Zeus, Hercules (1997)

As much as Zeus wanted his son to return to Mount Olympus, he knew that Hercules had to learn what being a hero truly means. It’s not about how strong you are or how many monsters you defeat, but rather, it’s about doing those things for the right reasons and caring about the people you help. Once Hercules learned that lesson, he emerged as a true hero.

6. “Sometimes you got to get through your fear to see the beauty on the other side.” Poppa, The Good Dinosaur (2015)

Arlo the dinosaur was afraid of pretty much everything in his life, which kept him from really living it. Poppa, though, did his best to teach Arlo that his fear was keeping him from really seeing the beautiful things in the world. Arlo needed to realize that if he could just push through his fear and do something bigger than himself, he would have a life truly worth living.

Mulan joined the army not because she wanted to fight, but because she wanted to protect her father and make him proud of her. It’s something anyone can understand—wanting your father to be proud of you. After Mulan returned home as a decorated war hero, though, her assured her that it didn’t matter if she was China’s hero or if she’d been sent home in disgrace—she was his daughter, and that was all he needed as an honor in his life.