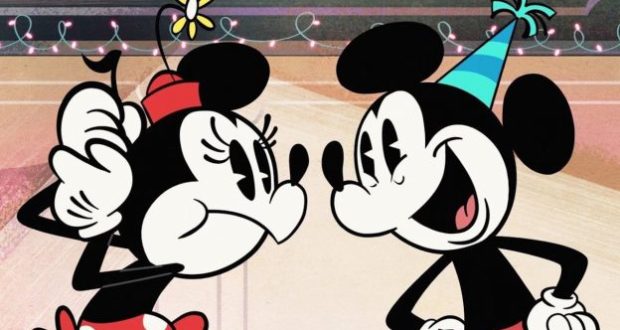 February has arrived and love is in the air! When we think of our favorite Disney couple, of course Mickey and Minnie’s sweet romance comes to mind. Well, let’s take a step back in time to see even more Disney romance. Check out the beautiful story below from DisneyParksBlog:

“Look at Mickey Mouse./ Look at Minnie Mouse./ They just live on love and chee-eeze.” – Mack Gordon & Harry Revel, “It’s the Animal in Me”

Collegiate football star and WWII hero Meryll Frost said in 1946, “They say behind every great man there’s a woman. While I’m not a great man, there’s a great woman behind me.”

That phrase has been used so often since, and probably become a giant cliché, but in observing Mickey Mouse and Minnie Mouse over nearly the past century, the one without the other seems somehow…off. Minnie may not simply be “the mouse behind her man” (she’s proven pretty stalwart on her own)—but the couple complements each other as characters, as personalities, as performers, as co-stars—and as tender romantics.

“Over the years Minnie has often been the impetus of the story for Mickey; the goal or prize he’s fighting to obtain,” says Disney writer and historian Keith Gluck, although he adds, “Minnie has also demonstrated that she can be quite independent when she wants to be.”

And, importantly, “The characters are scripted to always be in love,” according to Wayne Allwine, who provided Mickey’s voice for 32 years.

In the September 30, 1933 issue of Film Pictorial magazine, Walt Disney was asked if his two stars were married. He explained, “A lot of people have written to him asking this question because sometimes he appears to be married to her in his films and other times still courting her. What it really amounts to is that Minnie is, for screen purposes, his leading lady. If the story calls for a romantic courtship, then Minnie is the girl; but when the story requires a married couple, then they appear as man and wife.”

But the closeness and bond between voices and characters was surely echoed in their performances, as well as in the way they perceived Mickey and Minnie as a reflection of their own personalities, talents, and emotions.

In that way, too, it’s been observed that this legendary animated romance foundationally shares characteristics with Walt Disney and his wife, Lilly—since after all, they were both responsible for the creation of the cartoon couple.

The story of Mickey’s conception during a long, disappointed transcontinental railroad trip in 1928 is the stuff of legend. With Oswald the Lucky Rabbit gone, Walt relied on his “best friend and severest critic”—Lilly was right there, supporting Walt, listening to his ideas, and even gently guiding him to his new movie star’s name, Mickey (and away from Walt’s idea of “Mortimer”). Lilly and her sister-in-law, Edna, even secretly painted cels for the first Mickey (and Minnie) cartoon ever made, “Plane Crazy,” in the late summer of 1928, in the garage of their house on Lyric Avenue, near the Hyperion Avenue Studio.

It’s fairly certain that Walt was as coy as Mickey in romance. When he and Lilly first met, for instance, he would frequently offer to drive her home, along with another ink-and-paint girl, in the studio’s Ford roundabout. Walt always dropped Lillian off last, even though her home was closer. Lillian enjoyed that Walt wanted to spend more time with her.

Walt and Lilly also had a marriage based firmly in the unique bond forged by the magical mixture of love and laughter. Frequently, their good-natured sparring surrounded Walt’s beloved hats. Through the 1930s and 1940s, Walt was rarely without a favorite fedora. “When asked to ‘fix’ his hat, Walt would often respond with an exaggerated crush of the hat on his head. Lilly would occasionally abscond with his hat, sailing it far out of reach before Walt could rescue it from her clutches,” says writer and Disney aficionado Reed Milnes.

Another of Walt’s hats, a worn and rumpled favorite, annoyed Lilly terribly. On her birthday in 1941, Walt presented her with a beautiful arrangement of violets cascading out of and over a low vase. When she removed the flowers, the “vase” was revealed to be that annoying favorite hat—preserved in bronze, with the crown-shaped into a heart. (Walt must have gloried in his loving joke, and shared it with his artists—in the 1941 Mickey Mouse short The Nifty Nineties, one of the advertisements on the house curtain during a Vaudeville Show scene reads “Walter D’s hats that please.”)

Like all the humans behind the creation of Mickey and Minnie, the success of this beloved and loving pair comes from their own love of Mickey and Minnie. “There’s an approval factor from the characters to the public,” Russi Taylor said. “They don’t judge you. They never will. And I think that’s a thing that people want, and that keeps people coming back for more. It’s love. And people want love.”