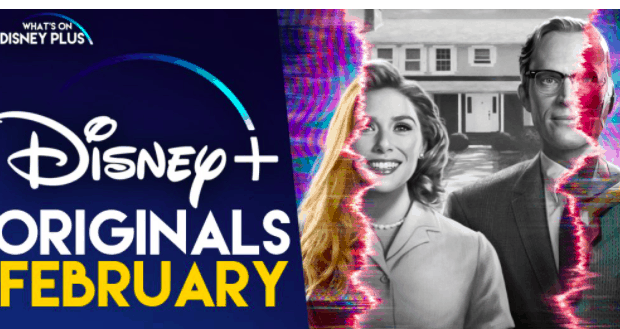 As we enter a new month, new originals will be added to the Disney+ line-up. Take a look at which programming you want to make sure you don’t miss this month.

Marvel Studios presents “WandaVision,” a blend of classic television and the Marvel Cinematic Universe in which Wanda Maximoff (Elizabeth Olsen) and Vision (Paul Bettany) – two super-powered beings living idealized suburban lives – begin to suspect that everything is not as it seems.

Marvel’s Behind the Mask

Marvel’s Behind the Mask will explore the power of identity behind the world’s most iconic Super Heroes we know and love today.

From the very inception of comic books, secret identities have been an integral part of both Super Heroes and Villains leading “normal” lives. But it’s the characters beneath that resonate within us across generations of fans. Since the advent of the Marvel Age of Comics in the early 1960s, Marvel’s writers and artists have used the notion of identities to examine the evolving concept of equal rights. These legendary Marvel creations and stories have not only reflected the world outside our window – they have become a reflection of our own identities and who we truly are.

A documentary series of personal and cinematic stories that provide an inside look into the people, artistry, and culture of Pixar Animation Studios.

Portraits: Patty Bonfilio, Director of Facility Operations
Synopsis: No two days are the same for Patty Bonfilio. From hosting major events to outfitting offices to simply keeping the studio running, Patty is at the center of it all. As Pixar’s Director of Facility Operations, she knows the inner workings of Pixar’s campus and culture like no one else. Join her on a VIP tour of the grounds and all of its hidden gems.

Portraits: Rachelle Federico, Production Assistant
Synopsis: Rachelle Federico always dreamt of working at Pixar, even if it meant a complete career overhaul. As Production Assistant on Pixar’s Soul, her hard work might not always be that glamorous, but she considers it an important and essential need in the creation of an animated film. Plus, she’s loving every minute of it.

Portraits: Cynthia Lusk, Director of International Production
Synopsis: Director of International Production Cynthia Lusk takes us into the fascinating world of localization. From translations to graphics to even changes in animation, Cynthia and her team work to make sure that Pixar’s films can connect and resonate to fans and families throughout the world.

These episodes will be arriving on Disney+ on Friday 12th February.

Flora & Ulysses is a delightful comedy-adventure based on the Newbery Award–winning book about 10-year-old Flora, an avid comic book fan and a self-avowed cynic, who rescues a squirrel with unique superhero powers. Flora & Ulysses stars Matilda Lawler and is directed by Lena Khan (“The Tiger Hunter”).

Flora & Ulysses will be coming to Disney+ on Friday 19th February.

The new short, directed by Jeff Gipson (Director of Disney Animation’s “Cycles”), takes the form of a bedtime fairytale that completely immerses audiences in the sights and sounds of Frozen 2. What starts as an ordinary evening inside an Arendellian home transforms into an adventure, where elemental spirits of Air, Fire, Water, and Earth reveal themselves through a whirlwind of 2D hand-drawn effects, 3D animation, and original music.

Myth: A Frozen Tale is coming to Disney+ on Friday 26th February.

Documentary features songs from “Frozen” and “The Lion King” reimagined and performed by #YOSHIKI. This Disney+ Original was originally released in Japan first.

Disney My Music Story: Yoshiki is coming to Disney+ on Friday 5th February in the United States.

Which new programming will you be tuning into in February?