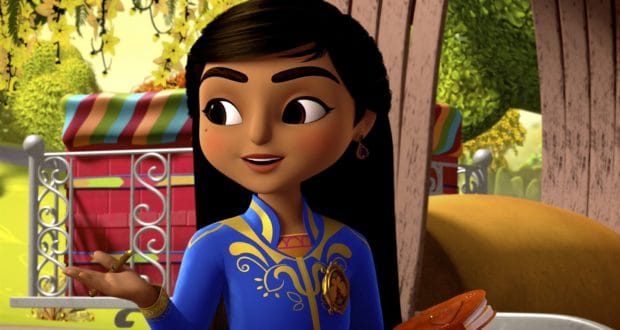 Get ready Disney Junior fans for an exciting and new cartoon called “Mira, Royal Detective”! This new cartoon features a young Indian girl and fans can’t wait to check it out. See the details below from NBC News:

“Seeing someone like yourself on TV, especially on a cartoon that you love or that you watch, gives you some sense of connection to your identity and your self-worth,” said Singh, 35, of Mountain View, California. “I think it’s incredible.”

The newest cartoon on Disney Junior has all the hallmarks one would expect from a children’s show — a smart, resourceful lead character, entertaining sidekicks, and a bright, colorful animated environment, filled with song and dance.

But those aren’t the main reasons Sonal Singh can’t wait for the debut of “Mira, Royal Detective.” She’s excited because her 3-year-old daughter will be seeing something that Singh would have loved to have seen herself a generation ago as a child growing up in America — an Indian girl at the heart of it all.

Debuting both in the United States and India on Friday, the cartoon incorporates the cultures of India and centers around Mira, a young girl who is named by the queen of fictional Jalpur as, yes, you guessed it, the royal detective. She’s got friends and relatives who help her solve her cases, along with two chatty mongooses (the sidekicks.)

The actors voicing the recurring and guest characters include a who’s who of South Asian talent, like Kal Penn, Freida Pinto, Utkarsh Ambudkar and Jameela Jamil. The voice of Mira belongs to 16-year-old Leela Ladnier in her first professional role.

“I would say this is a pretty good start” to a career, Ladnier said. The show has been a reminder of “how beautiful our culture is and I’m really excited to share that with the public.”

From the start, the intent was to make the show as true to its Indian inspiration as possible, said Sascha Paladino, the executive producer, whose resume includes working as a writer on another cartoon show that made a big impact, “Doc McStuffins.” That cartoon follows an African American girl who dreams of being a doctor while using her toys as patients.

“We wanted it to feel authentic,” he told The Associated Press. “The biggest piece of that in terms of authenticity was making sure we included as many South Asian voices in the process as possible.”

That means writers, designers, musicians, a cultural consultant and even seeking the input of the people working in the animation studio in India that did some work on the project.

That authenticity is both for Indian and South Asian kids and their families, to see their lives and cultures reflected, and for those who aren’t South Asian, to “see a new and interesting culture that hopefully they’ll want to explore,” he said.

“Ultimately I hope the characters are universal, that all kids can relate to the stories,” Paladino said.

For Penn, who plays Mikku, one of the mongooses, being part of the show is a thrill. He’s excited for people like his young nephew to have a show like this and other diverse offerings on television.

“This is going to be a generation of kids for whom this is going to be normal,” he said. “They don’t carry the emotional baggage or institutional memory of what it was like for us growing up with a lack of content on TV, they just don’t have that.”

If anything, he said, “my excitement coming into it I have to temper because I don’t want him to think there’s something abnormal.”

Cheyenne Paiva can’t wait to watch the show, and the 27-year-old woman, of Sri Lankan and Filipino descent, doesn’t even have any kids yet.

“I haven’t been able to celebrate a show like this my whole life, I think it’s pretty cool,” said Paiva, of Renton, Washington, who works in a medical lab but also does some standup comedy.

She’s inspired not only by what’s going to be on screen, but the involvement of South Asians throughout the production, especially some of the actors whom she’s followed for years as a fan.

“The seed wouldn’t have been planted that standup could be something I could do even for fun if I had never seen all these people,” Paiva said.

“Things like this always excite me and fill my heart.”