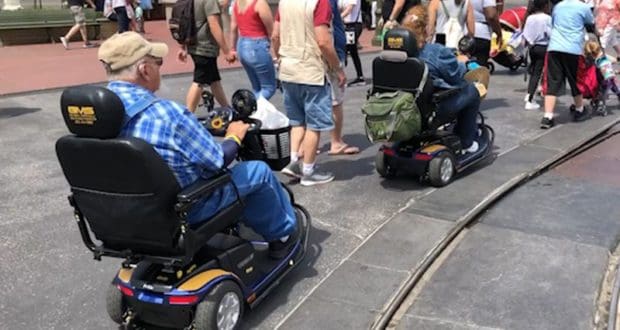 We have learned today from the Orlando Sentinel that Walt Disney World is being sued by a college athlete that said he lost his basketball season after being run over by a scooter at Disney’s Hollywood Studios.

According to the Orlando Sentinel, an accident occurred during a college basketball player’s vacation to Disney’s Hollywood Studios. The accident costed him his season so he is filing a lawsuit against the theme park.

“As David Maynard walked through Hollywood Studios, an electric scooter driver approached from behind and ran into him in May 2018, the lawsuit says. The crash severed 97% of his left Achilles tendon, which required surgery and extensive physical rehabilitation, the suit says.”

“Maynard missed the upcoming basketball season, according to his lawsuit seeking more than $30,000 and filed last week in Orange Circuit Court.”

“Maynard has suffered great pain and anguish of the body and mind,” his lawsuit said, which accuses Disney of allowing scooters too close to pedestrians and not properly training the unknown driver of the Disney-owned scooter, among other allegations.”

When Orlando Sentinel reached out to Disney for comment, Disney spokeswoman Andrea Finger said, “This is a matter is between two guests, and we will respond to the allegations as appropriate in court.”

“The lawsuit gives clues where Maynard plays but doesn’t explicitly say which school other than to reveal that he is a Utah resident who attends college in New York.”

2020-06-18
Jamie Sylvester
Previous: Dining Reservations Began Today for WDW Resort Guests (After 2 hr, 15 min Wait, We Snagged Ours!)
Next: How to Prepare Your Kids for a Post-Quarantine Walt Disney World