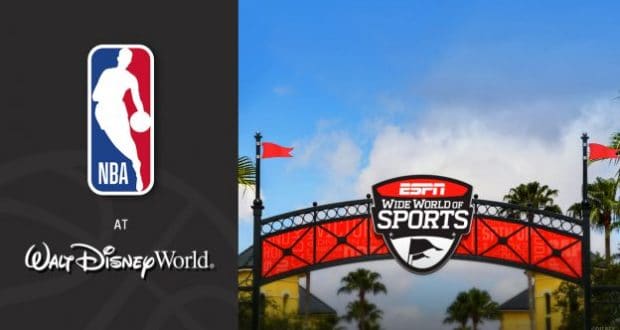 As we previously shared, the National Basketball Association (NBA) officially announced it will finish its 2019-20 season at Walt Disney World Resort. The season, which was interrupted by the pandemic, will resume on July 30 at ESPN Wide World of Sports Complex. Disney has set up an “NBA bubble” for the players at the Gran Destino Tower, Disney’s Yacht Club, and Disney’s Grand Floridian Resort.

According to the Orlando Sentinel, many of the Walt Disney World workers who will be cleaning hotel rooms, preparing meals and providing other services for NBA players confined to a “bubble” on the resort’s property will be commuting from some of the hottest coronavirus infection zones in greater Orlando.

Unite Here officials, who represent nearly 30,000 workers at the parks, say the planned procedures will keep their workers safe during the anticipated three months of NBA play at Disney’s ESPN Wide World of Sports Complex as well as the Major League Soccer tournament set to start there next week.

NBA players and staff will be kept as insulated as possible from exposure to the virus with a strict protocol set up by the league. Friends and family won’t be allowed to visit for weeks at a time. Players and staff will undergo multiple virus tests and near constant health monitoring. They are being ordered to follow strict social distancing guidelines and wear masks when off the court.

There are protections in place for Disney workers, too. They will be required to undergo health screenings and temperature checks, wear protective gear and social distance from each other and, in most instances, will be prohibited from coming into contact with NBA personnel.

The potential hole in the bubble, though, is that workers will come and go from the resort. There are 5,795 workers, according to the Sentinel analysis, who live in ZIPs in Orange and Osceola counties with more than 350 confirmed virus cases since the pandemic started.

“I think they have to be prepared, especially with the current situation in Florida and Central Florida in general … that something could go wrong,” Lapchick said. “It’s a high risk, but I think they’re minimizing the high risk as much as they can.”