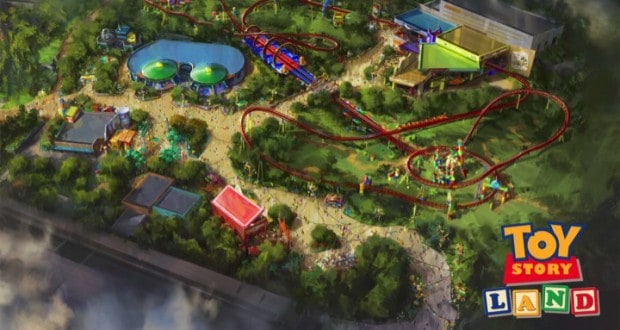 More Details Have Been Released About Toy Story Land

On April 2, 2016, a large portion of Disney’s Hollywood Studios closed, making guests start to wonder more about the future of the park. It was announced several months ago that two new lands are on their way, one based on Star Wars and the other on Toy Story. Today, more information was released on the Disney Parks Blog, giving guests a sneak peek into what lies ahead for Toy Story Land.

Guests will enter Andy’s backyard and “shrink down” to the size of the toys from the franchise. There, they will meet characters from the movies, including Buzz and Woody. There will also be two new rides in the land.

The first of the new rides will be a family friendly roller coaster called Slinky Dog Dash. The story is that Andy built the coaster in his backyard, using his Mega Coaster Play Kit, and since Andy has a great imagination he came up with a thrilling ride. He combined the kit with some of his other toys, including Slinky Dog, who doubles as the ride vehicle. There will be dips, turns, and drops, but since it is being called a “family” coaster most likely it will not be too intense.

The second new ride will be Alien Swirling Saucers. Fans of the first Toy Story movie will remember the green aliens from the game at Pizza Planet, and they are the basis for this ride. The concept is that Andy got an Alien Swirling Saucers game from Pizza Planet, and you will now be a part of that game. Your ride vehicle will be a toy rocket, and aliens will fly around you, trying not to get captured by “The Claw”. They will try to have you captured by “The Claw” instead. You will swirl around planets and satellites. There will be special effects, lighting, and “Space Jazz” music developed specifically for the ride.

No opening date has been given for the new land or either of the new attractions.

In a bit of other good news, it has also been announced that the third track for Toy Story Midway Mania! will open on Memorial Day Weekend. The third track will help to cut down the wait times for one of Walt Disney World’s most popular rides. 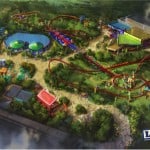 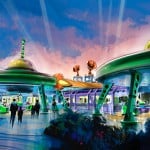 2016-04-20
PaulaK
Previous: Disney Announces Opening Date for Soarin’
Next: 6 Gems Not To Be Missed At Polynesian Village Resort At Walt Disney World 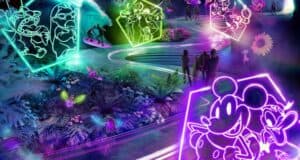