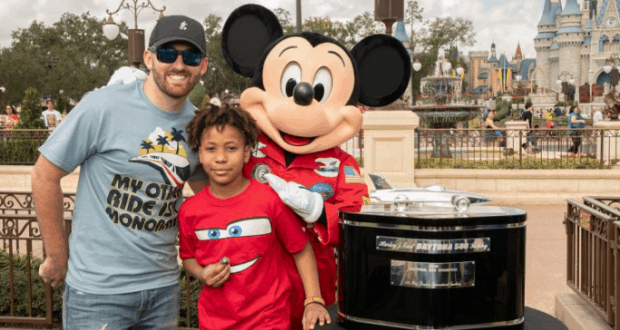 Austin Dillon is the defending Daytona 500 Champion.  He made an appearance at Magic Kingdom Park where he surprised one of his young fans for an unforgettable moment.  Jordan Wade got to have the best time with Austin.  The two first met last year right before the Daytona 500 and Austin gave Jordan an autographed hat.  Jordan gave Austin a lucky penny, which must have been pretty lucky since Austin won the Daytona 500 a few days later!  To thank Jordan for being such a great fan, Austin thanked him with a trip to Walt Disney World Resort.  Jordan got an amazing surprise and got to meet with Mickey Mouse and take a photo with the Daytona 500 trophy.  That is when he learned that Austin was also there and presented him with a Daytona 500 champion’s ring.

The pair then got to spend the day together riding attractions at the park, giving Jordan an amazing time at Walt Disney World.

Check out the video below that recaps their unforgettable day at Walt Disney World Resort:

What do you think of this amazing moment for a fan and his idol?