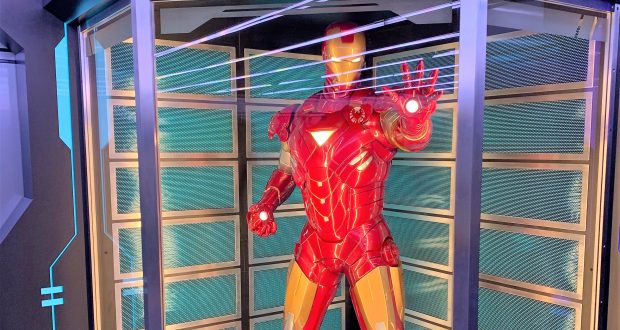 This is second day but the first full day of our Disney Cruise Line vacation on the Disney Magic. Today we’re at sea. After a good night’s sleep (the bed is really comfortable) we went on a media tour first thing in the morning. We started at Disney’s Oceaneer Club. This is for kids ages 3 through 12. They can participate in fun activities such as Avengers Academy. There are plenty of nods to Marvel in the Oceaneer Club, but there is fun for the younger kids as well. They will find Disney Junior fun, and there’s a Toy Story room that includes a Slinky Dog Slide. We also checked out the Oceaneer Lab, which is for the same age group. We also got a peek inside the It’s a Small World Nursery. While the kids’ clubs are included in your cost, the nursery costs $9 per hour. Next was The Edge, which is for ages 11 through 14. There are TVs, video games, and activities such as Wall-E Bits, where the tweens can make a robot. We then headed up into the front funnel of the ship, which really isn’t a funnel at all. That’s where The Vibe is located. It’s ages 14 through 17, and it’s a place where teens can hang out and make friends with others their age. The Vibe is designed to look like a loft in New York City, and it’s a pretty cool space. One of the things that was stressed to us about the kids’ clubs is that they do everything that they can to keep surfaces clean and sanitary. Kids are given wipes when they enter, and all surfaces are sanitized at the end of the day. That’s actually one thing that I have been impressed by throughout this ship. Disney is really stressing washing hands before eating. There are sinks and/or wipes as you enter each restaurant, and plenty of information on keeping germs away elsewhere. They are truly working hard to keep everyone healthy. We had to leave the tour a little bit early, because part of the package that Disney is hosting us with included a meal at Palo. We had the choice of brunch or dinner. We chose brunch, and we were happy with that decision. Palo is for adults only, and it is not included in the cost of your cruise. The current price I believe is $40 per diner. Brunch is part buffet and part sit down meal. We were offered a complimentary mimosa, but since none of us drink Sasha (our incredible server) brought us sparkling cider instead. We started the meal with a toast. He then walked us through the buffet. Because of dietary restrictions he checked a couple of things with the chef for us. I’ll write a full review of the main dining options when we get home. I will tell you this much. The food was excellent and the service was flawless. When we left Sasha gave my daughter and me each a hug, and there was a strong handshake for my husband. He truly made us feel like we had made a new friend. In order to burn off some of the calories from brunch my daughter and I decided to go for a walk around the ship. I’m actually surprised by how easy it is to get around. All that we need to remember is forward, mid, and aft. Everything is very well marked. Alvin, our room steward, has helped us to figure out things a couple of times as well. Alvin is another fantastic crew member. He’s taking good care of us.

One of my favorite things at Walt Disney World is the little extras that you will sometimes find, unexpected magic such as a character walking around a park or a live performance that you didn’t know was going to take place. There are lots of extras on the Disney Magic. My daughter and I stumbled upon the Jack Jack Race when we were exploring. It’s not anything that we would have gone out of our way to see, but it turned out to be a lot of fun to watch. The race was simple, babies were racing each other and crawling to the finish line. It was funny to watch the parents try to encourage the kids, and the babies had no idea what was going on. The winner received a Disney Cruise Line Bib. A good time was had by all, and when one baby finally crawled across the finish line everyone cheered.

One of the things that I didn’t know until recently is that Disney Cruise Line shows a lot of movies on their ships. If there is a Disney movie in theaters, it will probably also be showing on the cruise. If a movie premieres while at sea, it will premiere the same day on the ship. There are no premieres this cruise, so this afternoon we decided to see Mary Poppins Returns. This was shown in the Walt Disney Theater, and it was “practically perfect in every way”. Mary Poppins is a film that holds a special place in my heart, and there was something exciting about seeing the sequel on my first ever cruise.

Our dinner tonight was at the Beauty and the Beast inspired Lumiere’s. Our serving team continues to impress. Romain is our main server, and he is a credit to Disney Cruise Line. He’s personable and professional at the same time. He’s remembered our preferences, including small details like not being able to tolerate spicy food. My husband claimed that his salmon was one of the best meals that he ever had. The show tonight was Tangled the Musical. I enjoyed Twice Charmed yesterday, but this show was even more fun. I especially liked Maximus, it was fun to see how they brought the character to life.

Tomorrow we’re stopping at Grand Cayman. We don’t have anything specific planned. Several of the crew members have given us suggestions on how to spend some time without excursions scheduled. Everyone is being so nice and helpful.

I am having the time of my life.