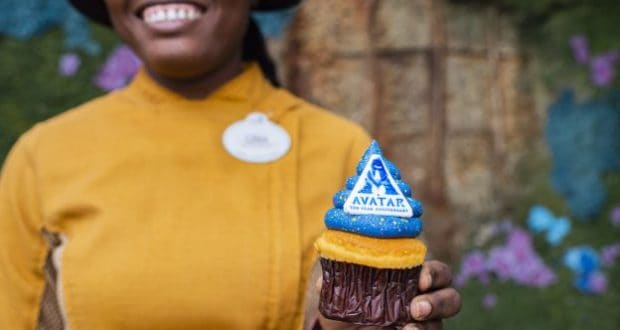 It’s hard to believe the popular movie, “Avatar”, debuted in theaters 10 years ago, in 2009. The film inspired the newest land at Disney’s Animal Kingdom, Pandora – The World of Avatar. So, what better way to celebrate “Avatar” 10th anniversary than with treats and merchandise to enjoy! Check out details below from DisneyParksBlog:

“Avatar” enthusiasts are invited to celebrate the 10th anniversary of the legendary film at Pandora – The World of Avatar at Disney’s Animal Kingdom. In this world of massive floating mountains, bioluminescent rainforests and breakthrough experiences, guests can now enjoy Avatar 10th anniversary merchandise, a tasty treat and more to commemorate James Cameron’s inspirational hit that left millions of moviegoers longing to visit the jaw-dropping Pandora he created for the big screen in 2009.

A limited release commemorative anniversary adult T-shirt, stainless steel water bottle and lithograph are currently available at Windtraders and  Island Mercantile at Disney’s Animal Kingdom. And guests can become ever more immersed in the Pandoran culture with a Na’vi-inspired face-painting experience at Colors of Mo’ara; add a Na’vi headband and tail combo (available with special pricing at Colors of Mo’ara as well as Windtraders) to complete the look.

Plus, from Dec. 17-19, Pongu Pongu will offer a celebratory cupcake featuring vanilla cake with blueberry cheesecake filling and blueberry buttercream to mark the film’s anniversary.

Celebrate the 10-year anniversary of Avatar on Twitter on December 18th. Follow @OfficialAvatar all day for never before seen content from the making of the film and special Q&A sessions with the cast and filmmakers. Share your love for Avatar using the hashtag #Avatar10YearAnniversary and stream the film on Disney+.