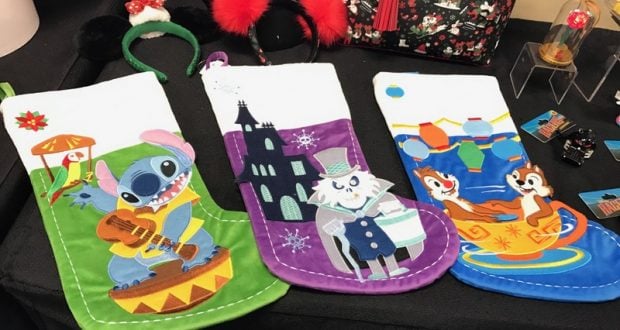 On Tuesday, July 25, 2017, I was lucky enough to attend a special event for media at Walt Disney World. The date of the event was perfect, since it was five months before Christmas. There were two parts to the event.

The first part of the day was an abbreviated version of Disney’s Yuletide Fantasy Tour. We weren’t allowed to take pictures during the tour, mostly because we were on a tour that is usually offered during the Christmas season, and things weren’t set up for the holidays. We started at Epcot. In Germany we learned about Christmas ornaments and carols. From there we moved on to Italy, where the talk turned to Christmas Nativity scenes. The next stop was The American Adventure. We learned a bit about the history of the Candlelight Processional. The tradition started at Disneyland, and Walt Disney himself was able to watch. The last celebrity narrator that Walt Disney saw was Dick Van Dyke. At Walt Disney World, the Candlelight Processional was originally held at the Magic Kingdom, but the park couldn’t handle the bottleneck that would occur when it was over. The last narrator at the Magic Kingdom was James Earl Jones. The holiday tradition has found a home at the America Gardens Theater at Epcot, and it works well there. It is now offered three times most evenings, starting the day after Thanksgiving and running through December 30.

The next part of the tour was held inside the America Adventure at Epcot, although if you sign up for the actual Disney’s Yuletide Fantasy Tour this part is held at the Magic Kingdom. We learned about aluminum Christmas trees and how a classic Christmas show pretty much put them out of business. We also learned about department store Santas, catalogs, and store giveaways. An interesting note was that most Christmas customs have been brought to the United States from other countries, but the community Christmas tree in a town square is an American tradition.

Next we boarded the bus and headed to Holiday Services. This area is where they prep for all holidays, but the main emphasis is on Christmas. On the actual tour the group will head to a resort instead and learn about the decorations and traditions there. There are 27 year round Cast Members at Holiday Services, and the staff also decorates the Disney Cruise Line ships and Disney’s Vero Beach Resort. When Christmas is growing closer the staff will grow, about 125 more Cast Members will be on hand to help install. The indoor decor is used on a six year cycle, while the outdoor decor has a three year cycle instead because of fading from the sun. It takes four nights to install the decorations at Disney Springs, two at the Magic Kingdom (this doesn’t include the lights on Cinderella Castle), and one night each for the other three parks. The installing of decorations on average takes one night at each resort. That does not include the gingerbread houses. There are three types of lights that are used; white, antique white, and multi-color, and 99% of the lights are now LED. When decorations are not going to be used any longer, they are sold to Cast Members at a huge discount.

Without spoiling the tour for anyone who might take it, here are a couple of interesting facts that we learned. There are over 1/4 million lights added to Cinderella Castle each Christmas season. You will not see full characters on trees; instead you will see things that represent the characters such as Minnie’s bow. The lights on Cinderella Castle are placed on painted fishing net, and they use a blueprint to install them. The staff at Holiday Services has a safety first policy.

Yuletide Fantasy Tour runs from 9:00am through 12:30pm, Mondays through Saturdays during the Christmas season. For more information call 407-WDW-TOUR (407-939-8687). I highly recommend it. A second holiday tour is also offered. Disney’s Holiday D-Lights Tour is offered for 12 nights only, and includes dinner at Whispering Canyon Cafe, lots of behind the scenes time and information at the Magic Kingdom, then special viewing for both the Candlelight Processional and IllumiNations at Epcot. Call the same number for more information.

We were then treated to several presentations on holiday activities at Walt Disney World for 2017. We learned that the batter for the gingerbread house at Disney’s Grand Floridian Resort and Spa has already been made. It takes 45 Cast Members two days to assemble the annual tradition. 2017 will be the 20th anniversary of the gingerbread house at the Deluxe Resort. The same design is used each year, but the decorations change.

Christmas in July at Disney Springs

Disney Springs is currently celebrating Christmas in July. For the event Amorette’s Patisserie is selling gingerbread cookies and peppermint macarons. The Ganachery is also celebrating with German Stollen Bread. The current offerings will also be available during the Christmas season, and The Ganachery will also offer Almond Christmas Trees. Another part of Christmas in July at Disney Springs is that Santa is on vacation. He’s seeing his fans in the shopping and entertainment district, at a rate of about 160 visitors an hour.

The Christmas Tree Trail will return for 2017. It will be bigger than last year’s, it will grow from 15 to 25 trees. The trees are either 10 or 12 feet in size. Some of the trees for this year’s trail will be Disney Springs Logos, Mickey and Minnie, Pluto, Sleeping Beauty, Beauty and the Beast, Snow White, Cinderella, Pinocchio, 101 Dalmatians, Peter Pan, Alice in Wonderland, Fantasia, Dumbo, and Mulan. The trail will end with a Santa tree. There will be “snow” and Christmas music along the trail. Each tree will feature an ornament that will be for sale at Disney’s Days of Christmas.

Christmas at the Magic Kingdom

At the Magic Kingdom the holidays will bring lots of joy as always. Mickey’s Most Merriest Celebration will include some fun activities. There will be a Main Street Trolley Christmas Show. Mickey’s Royal Friendship Faire will have a special holiday ending. There will also be a seasonal ending to Move It! Shake It! Dance & Play It! Street Party. If you plan to visit during  Christmas week you’ll be glad to know that the special events that take place during Mickey’s Very Merry Christmas Party will be held daily that week, so you’ll have a chance to see the holiday parade and fireworks.

Jingle Bell, Jingle BAM! will be back, and it will be larger than last year. There will be more characters in the show than before. While Jingle Bell, Jingle BAM! was never supposed to be about fireworks, there will be more of them included for 2017. We were also told that there are two more exciting things on the horizon for Christmas at Disney’s Hollywood Studios, but they are still a secret. We tried to get the information out of Tom Vazzana, who is a Show Director for Disney Parks Live Entertainment, but he wouldn’t budge. He said that even his own mother doesn’t know what these two surprises are.

For the most part, Christmas at Epcot will be what guests are used to. Holidays Around the World will feature storytellers, and JOYFUL! A Gospel Celebration of the Season will return. The main change will be at Mexico, where guests will be able to experience a more authentic Mexican Christmas festival. Names are starting to be confirmed as celebrity narrators for the Candlelight Processional, including Pat Sajak, Trace Adkins, Neil Patrick Harris, CCH Pounder, and Jaci Velasquez.

We then learned about some of the items that will be sold for the Christmas season. There will be a special holiday themed sweater and a countdown clock featuring Mickey and Minnie. New ornaments will include Disney Racers and handbags. A light up rose from Beauty and the Beast will also be sold. For Dooney & Bourke fans, a Disney holiday castle themed handbag will be available. There will be three designs of ear headbands for the holidays; one with red pompoms, a red one with a green bow, and a green band with a red Santa hat. Hanukkah items will also be sold. Holiday merchandise will be available in late October or early November. Remember that most of the items will also be available on the Shop Disney Parks App.

If you plan to visit Walt Disney World during the holidays and would like to add a little extra magic, contact Disney Floral & Gifts. With 48 hours advance notice, they can decorate your room. You can order a Christmas tree as small as four inches, or one as large as four feet. Stockings can be ordered as well. If you visit the Disney Floral & Gifts website you can customize your items. You can also create a fairy tale by having items such as a glass slipper and a tiara delivered while on a sleigh ride. There are packages for My First Visit, My Storybook Moment Princess, My Storybook Moment Sheriff Woody, and more. Disney Floral & Gifts can deliver to the resorts, to dining locations, carriage rides, and boat rides.

I want to thank everyone involved for allowing me to be part of this special media event. I look forward to what the holidays are going to bring to Walt Disney World this year. 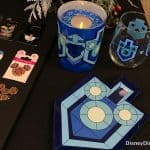 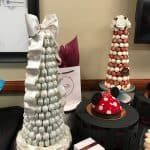 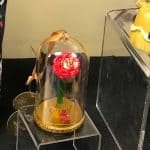 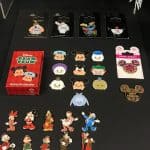 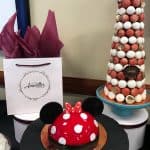 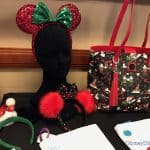 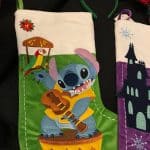 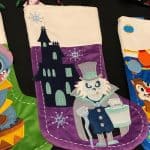 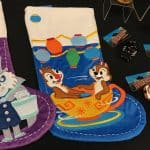 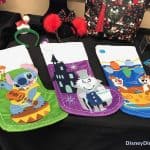 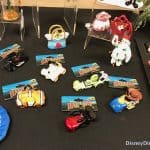 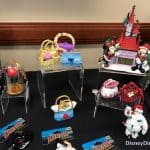 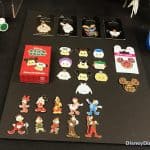