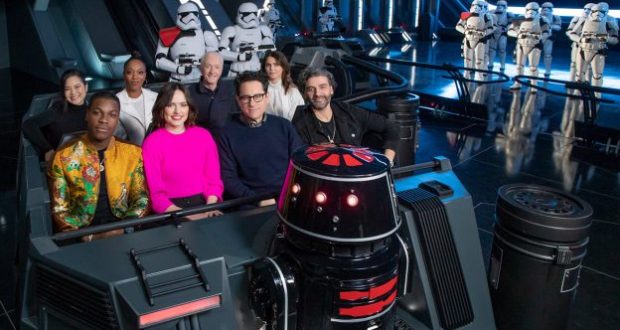 Cast of Star Wars: The Rise of Skywalker Experience Star Wars: Rise of the Resistance Attraction

Star Wars: The Rise of Skywalker hits theaters on December 20 as the newest Star Wars film. If you’re anything like us, you already have your ticket purchased and are counting down the days! The cast for Rise of the Skywalker have surely been busy as they prepare for the premiere. They did however find time to check out the the long awaited attraction, Star Wars: Rise of the Resistance! The attraction opened at Disney’s Hollywood Studios on December 5 while Disneyland is still waiting for their January 17 opening. Check out the details and reactions caught by DisneyParksBlog here:

This past week, the highly anticipated attraction Star Wars: Rise of the Resistance opened in Star Wars: Galaxy’s Edge at Disney’s Hollywood Studios in Florida. Meanwhile, the cast of the upcoming film, Star Wars: The Rise of Skywalker, got a first look at the attraction at Disneyland park in California before it opens to the public on Jan. 17. We caught up with the stars in Galaxy’s Edge just as they wrapped interviews promoting the new movie.

Director J.J. Abrams and film stars Daisy Ridley, John Boyega, Oscar Isaac, Anthony Daniels, Naomi Ackie, Keri Russell and Kelly Marie Tran were wowed at the sight of Star Wars: Rise of the Resistance. Star Wars: Rise of the Resistance is one of the most ambitious, advanced and immersive experiences ever undertaken by Walt Disney Imagineering, blurring the lines between fantasy and reality on a scale never seen before in a Disney attraction.

Check out the cast’s reaction below and hear what they had to say about Star Wars: Galaxy’s Edge and the film.