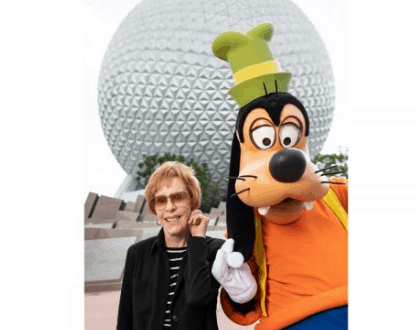 Walt Disney World is no stranger to famous visitors.  There are always different celebrities dropping by to get a dose of the Disney magic.  We learned from Disney Parks Blog that this past weekend, Carol Burnett was at Walt Disney World Resort.  Carol Burnett is a comedy legend, so it only makes sense that she would drop by and see Goofy, one of our favorite funny guys.  The pair got to spend time together at Epcot.  In the picture above, you can see Carol Burnett give her famous “ear tug,” which was a notorious thing that she did at the end of every single episode of her show, The Carol Burnett Show.  She was in town to visit for a stop on her new comedy tour.

It is a lot of fun when celebrities visit Walt Disney World! It goes to show that Disney is a magical place for any and everyone!  Have any of you had any fun celebrity sightings while in the parks?