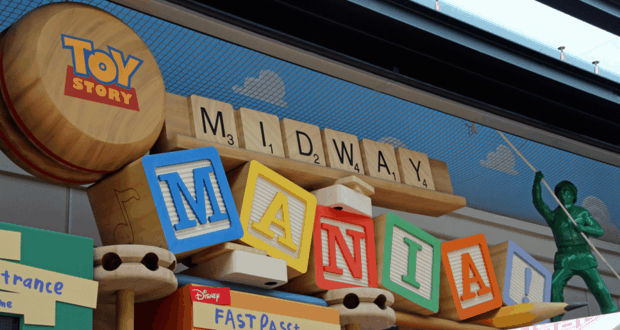 In an unexpected announcement Walt Disney World has said they will close Toy Story Midway Mania on March 15th, 2016 at Disney’s Hollywood Studios.

We are told the closure is to do with work related to the addition of a third ride track which they now confirm will open Summer 2016.

Any guests with FastPass booked for the attraction on March 15th will get a FastPass for a different attraction on that day. The ONE DAY closure of the original attraction is part of the expansion project.  Hopefully, this could signal an early opening for the 3rd track.

In other changes, the “Earffel Tower” landmark will come down at Disney’s Hollywood Studios soon, and the theme park will close several attractions April 2

Lights, Motors, Action! Extreme Stunt Show; Honey, I Shrunk the Kids Movie Set Adventure; a Monsters Inc. meet-and-greet, and the Studio Catering Co. restaurant will all close as part of a makeover. The theme park – which is also slated to get a new name – is adding two new lands, one themed on Star Wars and another on Toy Story. It has recently added a couple new attractions based on the space saga, including Star Wars Launch Bay and a new fireworks show.

No date was given for the Earffel Tower removal. The structure, 130 feet tall with a 32,000-pound set of mouse ears, has been at Disney’s Hollywood Studios since it opened. It does not hold water but was inspired by the working water tower in Burbank, Calif., a landmark at the Disney Studios since 1939.

The 40-minute Lights, Motors, Action! show features stunt cars performing high-speed chases and performers falling five stories. The stunts are played back on a massive video screen to demonstrate how movie chase scenes are made through film editing and camera angles.

Honey, I Shrunk the Kids is a giant playground that gives kids the illusion that they are the size of bugs. They can climb on a giant spider web and crawl through tunnels.

Also at Disney’s Hollywood Studios, the Osborne Family Spectacle of Dancing Lights on the Streets of America recently ended to make way for the new lands. Other closings have included the Studio Backlot Tour and American Idol Experience. The giant sorcerer’s hat at the center of the park also came down last year.