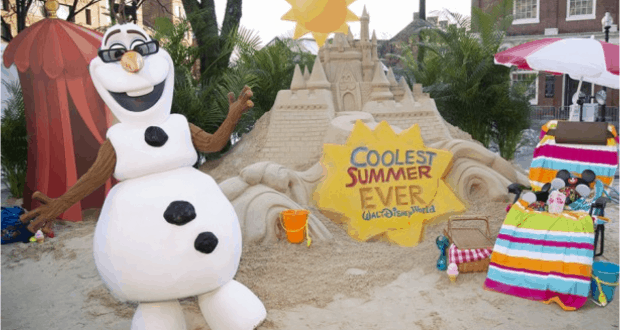 Olaf’ announced today on ABC-TV’s “Good Morning America, the “Coolest Summer Ever” is coming to the Walt Disney World Resort. And it all begins with a Disney Parks Blog reader favorite – a 24-hour event at Magic Kingdom Park – during Memorial Day weekend, the traditional kickoff to summer.

Quoting from the Disney Parks Blog:.

We’re kicking off the summer with an all-night party at the Walt Disney World Resort. Magic Kingdom Park will be open to guests for 24 hours of nonstop fun from 6 a.m.-6 a.m. May 22-23. Guests are invited to dress to show their Disney Side while a selection of favorite attractions, entertainment, merchandise, food and beverages will be on tap all night long to celebrate the start of the “Coolest Summer Ever” at Walt Disney World Resort.

For the “Coolest Summer Ever,” we’re already planning experiences you won’t want to miss. Here’s an early look at some of the highlights:

New Restaurants and Shopping – Throughout the summer, new waterfront dining and boutique shops flow into the Downtown Disney shopping/dining/entertainment district as its transformation into Disney Springs continues.