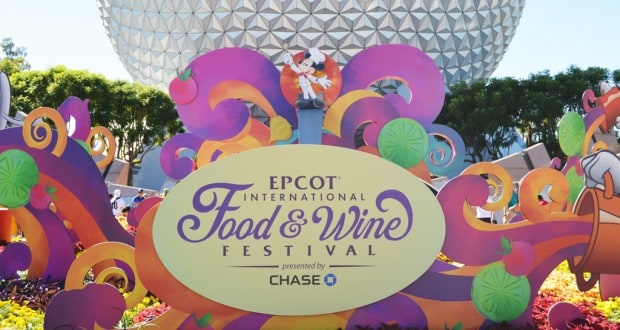 The 20th Annual Epcot International Food & Wine Festival is quickly approaching, and this year it is going to be bigger and better than ever. It will be held September 25-November 16, 2015. There will be over 30 food and beverage marketplaces this year, and for the first time ever the celebration will expand into Future World.

New for 2015 will be a region known as Artistry of Wine & Cheese. It will feel like Napa Valley; there will be pergolas with grape vines along the walkway that leads to Future World West. Artistry of Wine & Cheese will have two new featured areas. The Wine Studio will offer premium wines on tap. The Cheese Studio will feature a cheese sampler served on an artist’s palette.

Another addition for 2015 will be Next Eats. It will be located near the Epcot Character Spot. Next Eats will be inspired by ABC’s The Chew. There will be two new areas that are based on the daytime television show. The marketplace Sustainable Chew will allow guests to try dishes that were inspired by The Chew hosts. Three dishes will be available. Science and food will come together at Chew Lab, which will feature choices like Liquid Nitro Chocolate Almond Truffle with Warm Whiskey Caramel. It has also been announced that the hosts of The Chew; Mario Batali, Carla Hall, Clinton Kelly, Daphne Oz, and Michael Symon will tape episodes of the show from the Festival on October 7-9. Those episodes will air on ABC the week of October 12.

There will also be a premium event that is hosted by the cast of The Chew. Rockin’ Burger Block Party will feature burgers and pairings based on rock legends such as Dave Matthews and his Dreaming Tree Wines. That will be held on October 8. There will be two more Rockin’ Burger parties, but they won’t be hosted by The Chew cast.

Also new in 2015 will be the Yelloween Masquerade Party for the Senses. Held on Halloween, guests are asked to wear yellow and black. There will be special tastings and an elegant dance party. The cost has not yet been released. Reservations for this and other special events will open on July 30.

The Epcot International Food & Wine Festival is included with park admission, but there are extra charges for premium events, tastings, merchandise, and food. Favorite activities from the past such as the Marketplace Discovery Passport and the Ocean Spray Cranberry Bog will be returning for 2015. For more information or to make a reservation for a special event, call 407-WDW-FEST (407-939-3378).

2015-07-13
PaulaK
Previous: 10 Things At Walt Disney World That Choke Me Up Every Time
Next: Theme Park Survival Tips: When Park Guests Are Rude