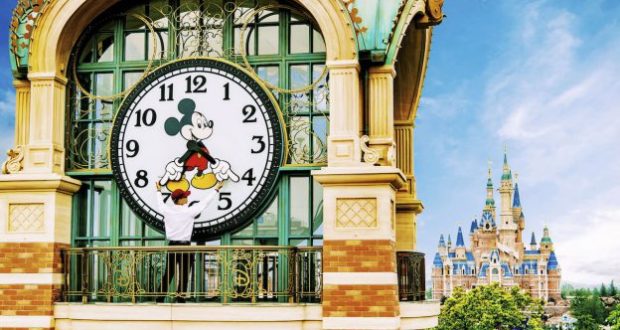 Behind the Camera Series: Clock Tower at Shanghai Disneyland

We’re excited to see Shanghai Disneyland Resort will be opening on May 11! What better way to celebrate than with DisneyParksBlog “Behind the Camera Series”. This stunning photo was captured by a Disney Photographer. See the story behind this photo from the photographer himself!

Photography is all about timing – pressing the shutter at just the right time to capture a moment, shooting at the time of day when the light is just right, etc. Sometimes it takes a lot of planning to make sure all of the timing comes together to make the picture the best it can be.

In my nearly two decades as a Disney photographer, almost all the photos I’ve taken were assigned to me – someone needed a particular image, and needed me to get it. Sometimes, though, I get a picture stuck in my head I really want to capture – whether anyone asks or not! That happened with the photo you see here from the entrance of Shanghai Disneyland.

In July 2015, Bob Iger revealed the layout of Shanghai Disneyland, using a giant scale model of the park. That was the first time I saw the entrance’s clock tower with the giant Mickey Mouse, and I said to myself, “There is a picture there, with a cast member adjusting Mickey’s hands. I really want to make that picture happen.”

Almost a year later, in April 2016, I arrived in Shanghai as part of the team that helped open the park. My role was to create a new image library for the park that would be shared with the world. Once on the ground at the new Disney property, it was very much a giant and ever-changing construction site, but I made a note of the progress of that clock tower. In early May, there was finally enough progress done to try for the photo but there were still a lot of arrangements to be made first.

I needed a lift to raise me above the ground and line up with the clock tower and Enchanted Storybook Castle. I also needed a cast member to be on the balcony in front of the clock to adjust the hands. Perhaps most challenging, I needed to keep the area free from all of the construction equipment, even as the park was close to its June 2016 debut. Finally, I needed to make sure all of this occurred early in the morning so the hands of the clock would be within reach of the cast member (the lighting wouldn’t be right in the evening, as I’d discovered on a scouting mission).

The morning of the shoot finally arrived, and our team was in place and ready – all told, it took five people on-site to make this happen (including me). Just as I was strapping into the lift, though, my cell phone rang, and that’s when I learned there wasn’t an access point to the clock balcony. I immediately left the lift and headed up the clock tower staircase, hoping we could still make everything work without losing too much time. Once at the top, we noticed that they had installed the windows since our last scout and it looked like we were going to have to find another way to get our cast member out onto the balcony. But then we noticed a single bottom-row window pane hadn’t been installed yet, so our cast member was able to step through the window, onto the balcony and into position.

I raced back down the stairs and to the lift to get up in the air before we lost too much time, the light changed, or Mickey’s giant hands were out of reach – or all three! We were able to try a few different shooting locations and lens options, but this was one of the first frames from that morning, before the cranes resumed their work on the castle and the park filled again with craftspeople putting the finishing touches on the park.

Getting to that moment took a lot of planning, effort and flexibility on the part of a lot of people, but it was all worth it when I finally saw in full color the image that had been in my head for the past year. It makes me smile every time I look at it, and was definitely a #DisneyMagicMoment.

2020-05-06
Jamie Sylvester
Previous: Mariachi Cobre from EPCOT Bring Their Voices to Your Home
Next: DCappella’s Rendition of Frozen 2’s “Into the Unknown”