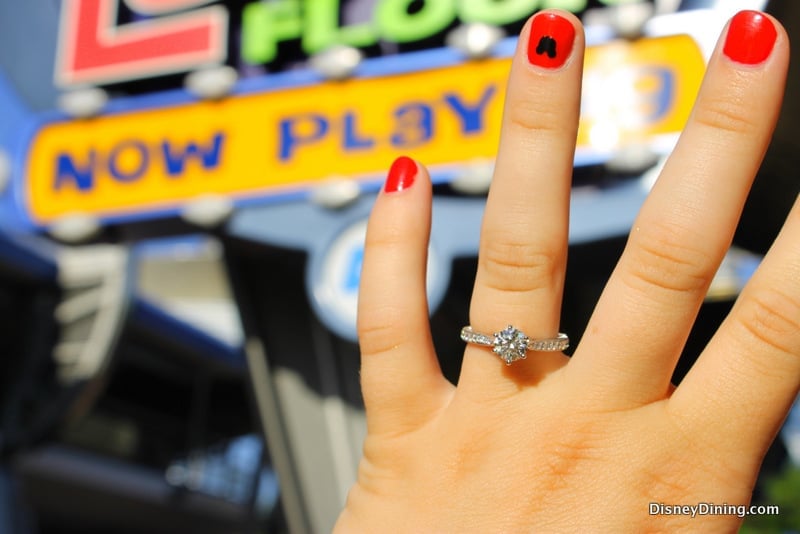 Ashley Gets a “Monsters Inc Proposal?

This was a story sent to us by one of our fans Ashley. Talk about dreams coming true at Disney. Wow!

I am an avid Disney lover and fan, and frequent the Disney parks at least once a year since I was three.  Needless to say, this trip was a little different than the others.

As we boarded our 6 am flight for Orlando International Airport, I had no idea what was about to happen as we made our way towards Walt Disney World.

As we entered the Magic Kingdom I was about to be asked the most important question of my life. I had always dreamt about being proposed to in Disney World.  When I was about six years old I saw a proposal in front of Cinderella Castle, and it was now my turn.

As we entered Disney’s Magic Kingdom, my now fiancé had informed me that he had made reservations at Cinderella’s Royal Table for Dinner and that we had just enough time to hit a few of our favorite attractions before our reservation.

As a huge Monsters Inc. fan, I begged him to take me to the corny, but favorite attraction of mine, Monsters Inc. Laugh Floor. We have been to the Laugh Floor numerous times, never had either of us gotten picked as an audience member that the monsters interacted with. I would always try, raising my hand, wearing my Mickey Ears, or even sitting in the seats, where in previous shows other audience members had gotten picked; but nothing for me.

As the show doors opened, we headed to the seats we normally sat in, the third row in the middle on the left side of the theatre. Sitting down all excited (since it was my first time in the attraction in a year), I looked at my fiancé and said let’s try to get picked by one of the monsters.

As the show began, I laughed at the Raz jokes, and at the re-telling of the Monsters Inc. Buddy Boil was the next act, my favorite, the “tele-pathetic” reading. He moved about the screen as he was picking an audience member and finally landed on me! I was so excited as I giggled and he made fun of my maxi dress, which he referred to as a tube in which tooth paste goes in. As he picked his fun and asked my name and where I was from, I giggled and answered Ashley from Hoboken (which is next to Manhattan), to which he responded konichiwa. He then asked me who I was with today; I answered my boyfriend Chase.

The camera then panned over to Chase, who was sitting right next to me. Buddy asked how long we had been dating, to which Chase had answered, “three years, but we have been best friends since we were five.” Buddy chuckled and said oh boy what a long time, I think it’s about time for a ring. Chase’s face turned bright red as he ruffled through his back pack, and finally answered; actually it is, “Ashley will you marry me?” As he got down on one knee, the entire audience gasped, the cast member holding the microphone was laughing and Buddy response was….what is your answer?

I said yes into the microphone, laughing, still in shock at what had just happened, as Buddy tried to bring me back to reality by asking me if he could come to the wedding and such. As the show continued, Chase pulled out just engaged pins that he had picked up at the Wilderness Lodge before we had left for the parks, and audience members congratulated us.

After the show, although we were not able to meet the monsters behind the scenes, because they had another show coming in, we were able to grab some awesome pictures in front of the Laugh Floor.

To top it all off, I also got a lovely glass slipper and dessert at Cinderella’s Royal Table and a great story to tell for the rest of my life. It was one of the most magical moments I have ever had in Walt Disney World, and the cast members helped to make it all possible!

Ashley, from all of us at Disney Dining, congratulations on your engagement!  May you have many magical memories ahead. 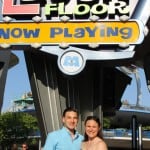 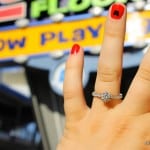 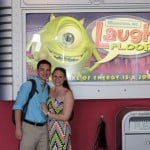 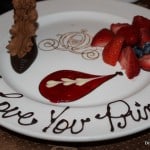 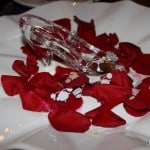