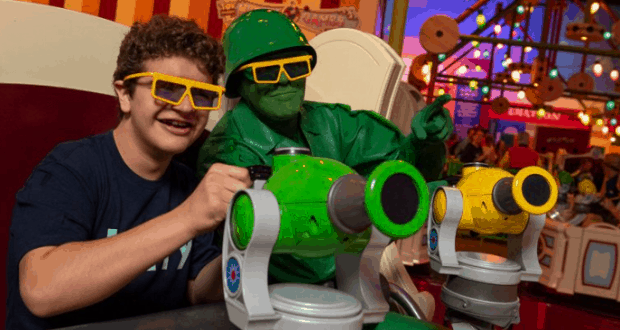 Walt Disney World is frequently the host to different celebrities.  The celebrity visitors can vary in all ages and this time we have learned of one of the younger Disney fans visiting the resort.   Gaten Matarazzo was recently hanging around in Toy Story Land within Disney’s Hollywood Studios.  While there he was able to check out Toy Story Mania! and even had a little help from one of the green army men.  Gaten also had the honor of becoming an “honorary toy” during is visit to the amazing, themed land and experience what it is like to be a toy playing in Andy’s backyard.

Toy Story Mania! isn’t the only fun to have in Toy Story Land.  Guests can also check out the family-friendly roller coaster, Slinky Dog Dash.  There is also Alien Swirling Saucers where guests can take a fun intergalactic spin.

Gaten is well known for his role on Stranger Things, one of the Netflix original shows.  The show has had two seasons and is set to debut a third season later this year.

Who else out there has had a celebrity sighting while at Walt Disney World?