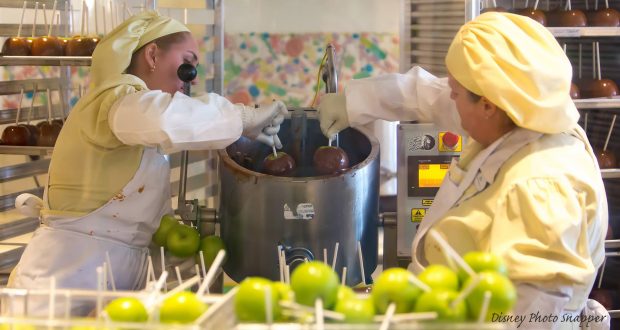 It takes a lot of special people to create magic. At Walt Disney World, those people are known as Cast Members. There are over 60,000 Cast Members and 3,000 job classifications, and those numbers will grow with the upcoming expansions. Here are eight reasons why it’s great to be a Cast Member. There are plenty more.

One word about Cast Members. They work hard, trying to make your vacation special. They put in long hours, sometimes on their feet in the heat, and they are often unappreciated. Thank the Cast Members who help you. Also, smile and acknowledge them when you walk by. If a Cast Member has gone above and beyond, go to Guest Relations and leave a compliment for him or her. You could end up making the day of the person who made your day.

8. Dining From Around the World

Foodies love working at Walt Disney World, because there are so many different dining choices. One evening they can enjoy an authentic German meal, and then choose Moroccan the next. Since many Cast Members are also huge Disney fans, they like to enjoy the restaurants when they aren’t working. Since they live so close, it’s easy to do. Most Cast Members have a favorite on property restaurant or two. Ask for a recommendation the next time you strike up a conversation with someone who works for Disney.

Florida may be hot and humid during the summer, but the winters make up for it. Cast Members enjoy the Florida winters. They can head to Mickey’s Retreat (a private recreation area for Cast Members and their guests) for a swim when they aren’t working, and the only snow that they’ll see will be made of soap. One of the nice things about living in the Orlando area is that there’s always something to do, so Cast Members won’t get bored on their days off.

Cast Members receive plenty of discounts on food and merchandise. Some of the deals aren’t available to anyone else, including Annual Passholders and Disney Vacation Club Members. They will often be allowed to ride new rides before anyone else. There are some discounts off property at other area attractions that Cast Members could be eligible for. There are special Cast Member only shopping opportunities. Cast Members can also give back to the community, by volunteering through Disney VoluntEARS. It’s a great way to help others.

5. Meet People From All Over

What better place to meet people from across the globe than at Walt Disney World? Cast Members will meet guests who come from all corners of the planet. They also have an opportunity to get to know some of these people well, since many Cast Members are from other countries. It can be a lot of fun to talk to someone who is from a different culture, and it just might help everyone to get along better, at least for a little while.

4. Go Behind the Scenes

It is fairly well known that the Magic Kingdom is on top of a set of tunnels. Known as Utilidors, most people have to sign up for a behind the scenes tour to see them. Cast Members not only see then Utilidors, they use them every day! This is just one way that Cast Members get to see how the magic is made. They get to know the ins and outs of what it takes to keep the world’s most popular theme parks running. They experience a different kind of magic.

Walt Disney World tickets are expensive, but not for Cast Members. When they aren’t working, they are allowed in the parks to play. They also get some tickets for friends and family as well. There are blockout dates for tickets and for non-working Cast Members, but those dates aren’t all that common.

Even though Walt Disney World is the most magical place on Earth, not everyone is happy every moment of their vacations. Cast Members can sometimes help with that. It could be that a Cast Member had a great conversation with your daughter that helped put her fears aside about a ride, or maybe the Cast Member gave you a great dinner recommendation when you couldn’t get a reservation that you wanted. Cast Members will also sometimes provide a little extra magic. That could be a stuffed Mickey for a toddler, an unexpected character greeting, a room upgrade at the hotel, or something totally different. Extra magic happens when you least expect it.

One of the best reasons of all to be a Cast Member is because it’s Disney! Cast Members have bragging rights that you don’t get at any other job. While other jobs may require a pen and a briefcase, Cast Members use magic wands and pixie dust. It’s not a faultless job, but for someone who loves Disney and wants to make dreams come true, it’s pretty close to perfect.

2016-11-02
PaulaK
Previous: 8 Things You Should Definitely Do When You Arrive at Magic Kingdom
Next: D23 Holiday Event to Be Hosted at Disney Springs in Walt Disney World