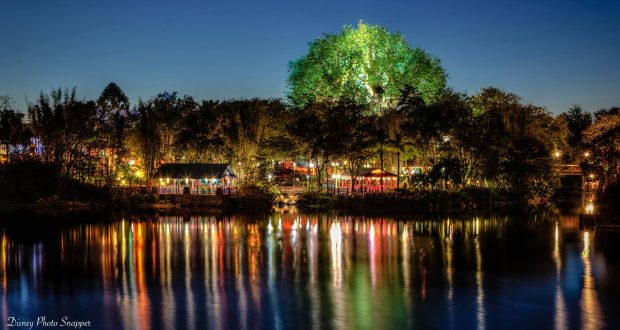 5 Things to Do at Night at Disney’s Animal Kingdom

Disney’s Animal Kingdom is huge, and with the late hours you’ll probably be tired once the sun goes down. That makes it the perfect time to stop by Nomad Lounge! Located next to Tiffins, you can sit down and relax for a little while. Order an appetizer, such as House-made Head Cheese and Chicken Liver Pate, Seared Wagyu Beef, or Vegetarian Summer Roll with Ponzu. You are going to want something to wash down your appetizer, and that is where Nomad Lounge really shines. Specialty drinks for those 21 and older include Leaping Lizard, Spice Trader Classic, and Tempting Tigress. There are also non-alcoholic specialties, such as Happy Macaque and Lilly Gorill-ie. You don’t have to wait until after dark to visit Nomad Lounge, but by then you’ll be happy to have a place to sit down and recharge.

Once the sun goes down it is time to party! That is what Discovery Island Carnivale is all about. Enjoy the colorful costumes, the stilt walkers, and the beauty of nature, but what you’ll remember about Discovery Island Carnivale is the music. You can clap or dance along with The Viva Street Band! and more. The party lasts for hours, so you won’t have to worry that you’ll miss it.

For years the secret to riding Kilimanjaro Safaris has been to ride first thing in the morning, since that is when the animals are the most active. That is no longer necessarily the case. Kilimanjaro Safaris now runs at night as well, giving you a new look into the lives of the nocturnal animals. Harambe Wildlife Reserve is lit to mimic twilight, so you will still be able to see. Check the time for sunset before making your FastPass+ reservation, the best time to ride is right as the sun goes down.

The Tree of Life is the icon at Disney’s Animal Kingdom. There are over 300 animals carved into the trunk, and it houses the It’s Tough to Be a Bug! show. At night, you’ll now be amazed by the Tree of Life. It comes alive with color, but it does not stop there. Several times each night something magical happens. The Tree of Life becomes a projection screen and the animals seem to come to life. The show lasts for about three minutes. The times are not published, and most Cast Members don’t know when the magic is going to happen. You’ll just need to stare at the icon for a while, waiting. The Tree of Life is now so beautiful at night that you won’t mind.

1. The Jungle Book: Alive with Magic