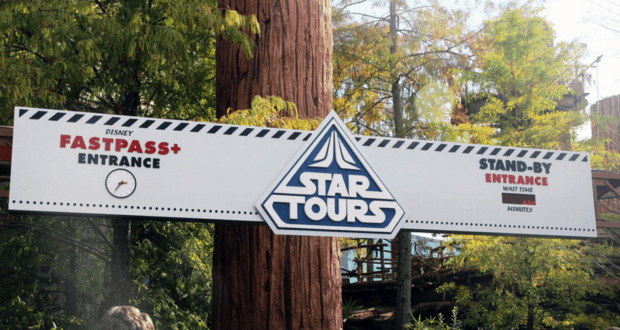 5 Reasons Why We Love Star Tours – The Adventures Continue

Star Wars fans will be thrilled the moment they see the giant AT-AT outside of the ride. You’ll feel like you’ve stepped inside the movie! Before you get in line take the opportunity to get a picture on the nearby speeder bike. If there’s a line outdoors you’ll wind your way through an Ewok village. Their cottages will be overhead. If you close your eyes you just might think you hear one say “yub nub”. The main problem with the outdoor queue is that it does tend to get hot in that line, but fortunately it moves quickly.

Once inside, all disbelief will be suspended. You will truly feel like you’ve stepped into the Star Wars universe. You’ll see R2-D2 and C-3PO, they’re getting your Starspeeder 1000 ready for your flight. Overhead there are some members of the Mon Calamari species in the control room. There’s a screen in the back of the room that alternates between ads for different worlds that you can fly to, and weather conditions from around the galaxy. As you head into the next room you’ll see several droids on your left. One of them is RX-24, or Captain Rex. He was the inept pilot of the original Star Tours. There are two scanning droids that you’ll pass. G2-9T is scanning bags, and he’s hilarious. Watch for a little while, and pay attention to some of the things that are hidden in those bags. G2-4T is the second scanning droid, he scans the passengers. He has some great lines as well. You’ll also want to pay attention to the window with the shadows. You might recognize some of the forms, and you could also see a Hidden Mickey.

If you’re a fan of the often critical droid, you’ll love Star Tours – The Adventures Continue. You’ll see him three times! As already mentioned, he’s with R2-D2 when you first enter the building. The second C-3PO sighting is right before the pre-flight movie. He’ll board the Starspeeder 1000, complaining as he goes. Pay attention to the monitors or you might miss that one. The third time you’ll see the golden droid is when the ride starts, because he’s mistakenly your pilot. Two of the appearances are Audio-Animatronic, making it feel even more like you’re in the saga. C-3PO is voiced, as always, by Anthony Daniels.

2. True to the Movies

The Star Tours ride itself is incredible. It is as true to the movies as possible. You’ll visit places that you’ve seen in the movies and encounter characters from the movies played by the original actors. It is true that there are some continuity problems from time to time (such as seeing Darth Vader and Jar Jar on the same trip) but in the long run those things don’t matter. Star Tours – The Adventures Continue will make you excited about the upcoming Star Wars Land.

One of the best things about Star Tours – The Adventures Continue is that the possibilities are endless. Since there are several different scenarios it’s rare that you’ll end up with the exact same ride twice. The possibilities don’t end there. There are more new movies on the way, and it has already been announced that characters and worlds from future releases will be added into the ride. As long as the Star Wars franchise continues to grow, you can expect Star Tours to continue to change as well.