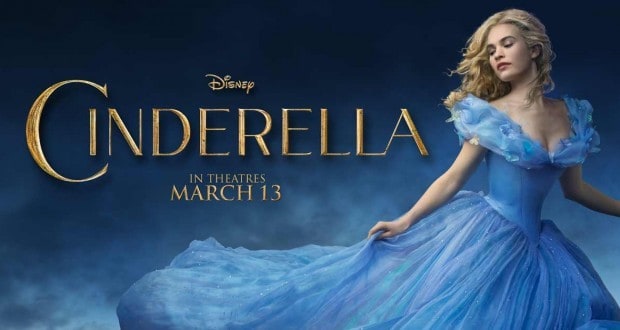 5 Reasons Why Disney’s ‘Cinderella’ Is A Must See!

Thanks to DisneyFanatic.com for this awesome review!

As a die hard Disney fan, it’s a forgone conclusion that I’ll always catch the latest Disney flick to hit the big screen. That being said, taking on the herculean task of retelling the original European folk tale is no small feat, especially considering the charm and magic of Disney’s original 1950’s film. It is rumored that Walt Disney’s favorite animated moment was Cinderella’s transformation into her stunning ball gown in the classic film. No less magical is this new, live-action version of the unforgettable tale as evidenced by my getting goosebumps when the Fairy Godmother (Helena Bonham Carter) transformed Cinderella (Lily James of Downton Abbey) into a ball-worthy attendee. Here are 5 reasons why you’re going to love Cinderella!

5. The Story – As with any fairytale retelling, artistic license was indeed taken in this generation’s version of Cinderella. We get to see our heroine’s mother and a great deal more of her childhood before she was cruelly subjected to the authority of her wicked stepmother. Even certain characters in the castle, who shall remain nameless lest we spoil the movie for you entirely, conspired against the young lovers. Overall, I was very satisfied with the integrity of the story line and gained a new respect for the creative minds at Disney who reimagined this sensational tale.

4. The Spectacle – Filmed entirely in the UK, there is no shortage of breathtaking land and seascapes as well as structures both quaint and grand. The grand hall of the palace will impress with it’s dual staircases which spill into the heavily marbled dance floor of the ballroom. Even Cinderella’s attic room boasted significant charm with its’ vaulted ceiling and winding staircase! The glittering carriage topped by a lacy, gilded pumpkin, flanked by lizard-footmen, drawn by mouse-horses and driven by a goose is perhaps one of my favorite scenes, particularly as they turn back into their former selves when the clock strikes 12. Get ready to enjoy a feast for your senses with the overall splendor of this story’s cinematography!

3. The Actors – Celebrities pack the roster on this Disney flick and include such names as Cate Blanchett and Helena Bonham Carter. Downton Abbey lovers will enjoy seeing some familiar faces including Lily James (Cinderella) and Sophie McShera (Drusilla). Director Kenneth Branagh (you may remember him as the bad guy in Shadow Recruit) definitely ‘gets the goods’ from cast members and inspires serious chemistry between Cinderella and her Prince, the dreamy Richard Madden!

2. The Family – From touching moments spent with her mother and father, keeping company with furry little mice and the hatefully colorful step relations, this film runs the gamut of family dynamics, illustrating how important and formative is ones’ childhood. Seeing the young Ella with her mom and dad was endearing and set the stage upon which she demonstrates her spotless character whilst dealing with her evil step-relations. Blanchett’s performance is wickedly spot-on and makes her a villain you’ll love to hate!

1. The Message – Unquestionably, the strongest theme of this movie was a phrase Cinderella’s mother shared with her before she died – “we must simply have courage and be kind, mustn’t we?” Always endeavoring to teach such values to my own daughter, I was inspired, as was she, while we watched Cinderella choose not to respond in kind when treated so poorly by her step relations. Treating others with respect and deference, serving even when unappreciated, hoping when life is at its’ darkest… each are common themes in this sparkling movie and capture the Disney message that is such a common theme in their animated films. In a time where we are barraged by an array of disreputable characters on screen and in real life, Cinderella shines a light on a core truth – that you can choose to be courageous and kind no matter what life throws your way and rise above your circumstances.

Bottom line – Cinderella doesn’t disappoint and will be enjoyed by all with its’ star-studded cast, epic scenery and endearing story – not to mention that gorgeous ball gown! Makes me wonder if/when Disney will begin mass producing miniature versions of the glittering blue frock that rivals the beauty of Elsa’s transformation dress from Frozen. So, don’t wait for it to come out on DVD, enjoy the magic of this epic ‘happily ever after’ feature on a big screen near you. Bibbidi-bobbidi-boo!

2015-03-13
David
Previous: 5 Reasons Why You Should Not Skip Kali River Rapids At Animal Kingdom
Next: Festival of the Lion King in Harambe Village, Disney’s Animal Kingdom