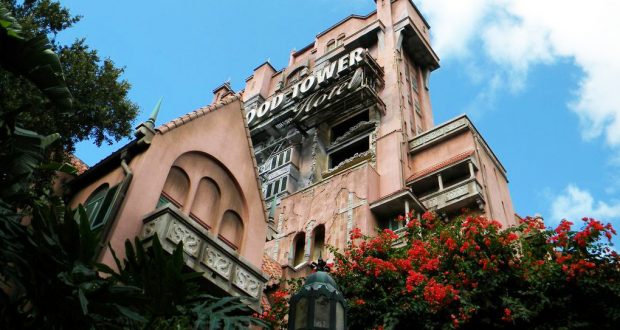 5 Reasons We Love The Twilight Zone Tower of Terror

It’s pretty difficult to walk down Sunset Boulevard and not notice the Hollywood Tower Hotel looming over the streets of Disney’s Hollywood Studios. The Tower of Terror is the parks icon, and for good reason. Even if you have never seen an episode of The Twilight Zone, guests can still appreciate the incredible detail that goes in to this attraction. For those familiar with the TV show it is based on, the experience really comes alive! Here are 5 reasons we love The Twilight Zone Tower of Terror!

For those familiar with the original television episodes, you are treated to dozens of replicated props used in the series. Each prop brings back an iconic piece of plot history from an episode. I have personally been on this ride nearly 100 times and I’m always looking for something new. Many of these props can be found inside the library where the video is shown. This means you will have to survey the room in a hurry as lights dim quickly before you are being ushered to the boiler room. My personal favorite is found upon exiting the ride. While everyone is walking toward their ride photo, look to the left. You’ll find a patch of brickwork with chalk lines from the episode Little Girl Lost. It makes for a great photo op!

Rod Serling, the creator and host of the show, makes an appearance to introduce us to the journey we are about to go on. But how did Disney pull this off since Serling died nearly two decades before the Tower opened? While we dont want to spoil all the magic for you, we will tell you that Disney auditioned hundreds of people for the role of this off-screen voice over actor. The actor was chosen for the role after winning the approval of Rod Serling’s widow herself! Combine this with some careful editing and a little Disney magic and you have Rod Serling himself taking us straight into, the Twilight Zone!

I have to admit, I’m not much of a fan of gift shops, especially when you are forced to exit through one. However, this one just feels different, maybe because you can pick up items here that you wouldn’t find in an ordinary gift shop. This shop is filled with ride appropriate memorabilia. Many items have the hotel logo emblazoned including: do not disturb signs, slippers, pillows, bath robes, and more. You can even get the same hat worn by the cast members working the attraction. Our only advice is to avoid the desk top bells. They look pretty, but dont work very well.

The Hollywood Tower Hotel is an abandon hotel with all the telltale signs. Things appear to have been deserted for quite a long time. Upon entering the grounds you will see signs of overgrown landscapes and a sense of eeriness as you hear orchestra music from the past, including Glenn Miller and other notables. As you make your way past empty and broken water features, you soon turn the corner on the upper terrace to enter the hotel lobby. Furniture is covered in decades of cobwebs. You are directed in to the library as the lights drop, a thunderstorm forms outside the window, and then TV begins to play. Rod Serling delivers his remarks giving the history of the hotel before inviting you to step aboard. When the lights go up, a hidden door on the opposite side of the library opens. You find yourself in the hotel boiler room waiting to board a service elevator. While some attraction queues are better than others, the queue at the Twilight Zone Tower of Terror Hotel arguably ranks at the top.

As you near the end of the queue, a cast member asks how many people are in your party and gives direction to line up to make for a proper seating arrangement. Once seated and the seat belt check takes place, the doors close and off you go, straight up. You can feel the elevator ascend before making your first stop where the doors open and some optical illusions take place in front of you. The doors close and once again, you are elevated to your next stop. But this elevator is unlike any other. This vehicle does not just go straight up and down. Your vehicle begins moving forward into the corridor as cinematic lights and sounds build in anticipation for the final part of your journey. While most people know this ride is a free falling ride, what no one knows is the sequential order of your drops. The drops have been randomly programmed giving you a different experience each time. Make sure you smile for the camera (psst it’s where the ride pauses at the top with the doors open). Once your ride is complete you are congratulated by Serling. Look for more memorabilia as your vehicle rotates before you exit!

There you have the 5 reasons we love The Twilight Zone Tower of Terror. It is personally one of my favorite rides. What do you love about it?