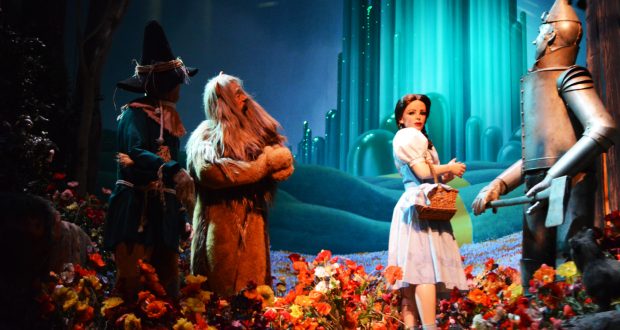 The Great Movie Ride is one of my favorite attractions in Hollywood Studios. For some reason, I remember this ride even from when I was a little kid. There’s just something about the movies. This ride gives guests an awesome behind the scenes look into the movies and even lets you play a part.

The Great Movie Ride has been around as long as the Park itself, back when it was MGM. It has changed throughout the years, but not much: its integrity and timelessness remain. The exterior of this ride is an exact replica of the famous Hollywood Chinese Theatre. Disney spared no effort in the detail of the look of this ride. Inside the theatre, the classic flair wins out. From the opening queue movie to the slow moving vehicle, this ride inherently feels longstanding.

“Lights! Camera! Action!” Your trusty movie guide is prime for reminding everyone of their favorite movie lines. The Great Movie Ride is pretty self-explanatory: the ride takes the best of the best and lets you dive in. From “Toto, I have a feeling we’re not in Kansas anymore,” to “Here’s looking at you, kid,” you hear it all. And, if you go on the ride enough times, even the guide’s script becomes quotable. “Oh, one more thing. Um, when I yell “Action!”, don’t forget the thunderous applause for your tour guide. Places, everybody! And … Action!”

As great as this ride is, it’s super cheesy. There’s nothing serious about this ride (except for the physical building). From the second you step on your slow moving vehicle, the script is full of fluff. About three minutes into the ride, your guide runs into trouble and your car gets hijacked by a gangster or a cowboy! “No more red light.” But have no fear! This bad guy gets greedy and tries to snatch the precious red jewel, which a mysterious keeper specifically told him not to. But he touches it and perishes and your guide returns as a hero! “See you in the movies!”

Even though it’s done in cheesiness, your tour guide does give riders really cool bits of trivia about all of the movies displayed. Just in the second scene of Singin’ in the Rain, there’s cool information you might not have known. Like, did you know that star Gene Kelly also directed the film? He also had a brutal cold while he filmed the iconic umbrella in the rain scene. Or, did you know that in the classic film Fantasia the sorcerer’s name is Yensid, which is Disney spelled backwards?

The outside courtyard of the Chinese Theatre is filled with real life hand and footprints from celebrities like Jim Henson and Kermit, Harrison Ford, Angela Lansbury, Michael Jackson, Robin Williams and so many more. In the queue, various props and costumes from famous movies are on display and get switched out fairly regularly. These have included Rose’s dress from Titanic, Mary Poppin’s carousel horse, and the Ruby Slippers from The Wizard of Oz, just to name a few. Inside the actual ride there are lots of set replicas and voice-overs from the actors, not to mention about one hundred movie clips at the end. Fun fact: the plane in the Casablanca scene is only one half! The other is in the Jungle Cruise in Magic Kingdom.