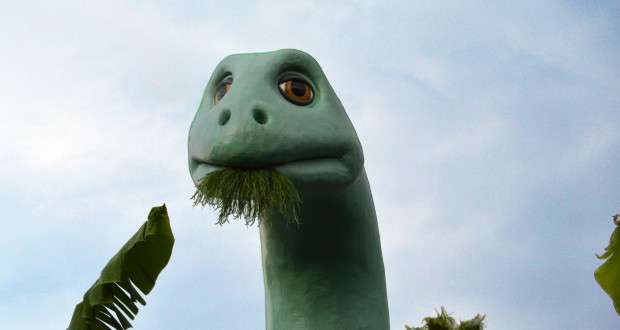 Disney’s Hollywood Studios is full of architecture which is reminiscent of famous buildings found in the real Hollywood. While many guests recognize that the replica of Grauman’s Chinese Theater that once housed The Great Movie Ride and will be home to Mickey and Minnie’s Runaway Railway in the future, there is another building which holds significant Disney history that might be overlooked. On Sunset Boulevard there is a store titled Once Upon A Time which sells unique Disney merchandise. Additional signage on the exterior of the building advertises Carthay Circle, a famous theater in Hollywood where Snow White and the Seven Dwarfs first premiered in 1937. The exterior of Once Upon A Time is reminiscent of the theater and pays homage to both Hollywood and Disney history.

One of the most thrilling attractions in Disney’s Hollywood Studios is The Twilight Zone Tower of Terror on Sunset Boulevard. The attraction invites guests to star in their own episodes of the hit television series and features plenty of details and props that pay homage to original episodes. Guests who move through the lobby of the Hollywood Tower Hotel can spot an award which hints at the sinister spirit of the tower. The AAA 13 Diamond Award was given to the hotel and hangs near the front desk, however the real life award only reaches 5 Diamonds.

Also found in the lobby of The Twilight Zone Tower of Terror is a prop which pays tribute to an episode of the television series. Guests can spot a pair of broken glasses placed delicately on a nearby table in the lobby. The glasses reference the episode “Time Enough At Last” in which a single man survives on Earth with finally enough time and quiet to enjoy all of his favorite books. The man is in paradise until he fatefully breaks his glasses, effectively leaving him blind and tortured.

Toy Story Mania in the Pixar Place section of Disney’s Hollywood Studios is one of the most popular attractions in all of Walt Disney World. Guests who enjoy the experience can shrink down to the size of toys to compete in a series of 3D midway games hosted by the Toy Story characters. After boarding their attraction vehicles and just before entering into the game, guests pass by the larger than life box that they midway games belong inside of. On the box is a barcode with the numbers 121506 which represent December 15, 2006, the date that the attraction was announced.

The Echo Lake section of Disney’s Hollywood Studios is home to a large green dinosaur with a quick service dining location located inside. While many guests recognize the dinosaur, they might not know that her name is Gertie and that she has a rich Hollywood history. Gertie was created by Windor McCay who would perform an act in front of a screen playing animation of Gertie. McCay would appear to be directly interacting with Gertie, which wowed audiences at the time. Today Gertie can be found serenely hanging out in Echo Lake!

Star Tours – The Adventure Continues invites guests to embark on an epic adventure through the Star Wars universe with familiar places and characters. What begins as a routine Star Tours flight suddenly has guests joining the Rebel Alliance after a Rebel Spy is located on board. While waiting on the queue for the attraction, guests should listen for an interesting page for an individual named “Egroeg Casul” which is George Lucas backwards.

Guests who are looking for a good laugh should definitely stop by Muppet Vision 3D for a hilarious show. The attraction brings guests into the Muppets’ world where chaos and humor occur as only the Muppets can do. Before entering into the preshow area of the attraction, guests move through a short hallway filled with various offices of the Muppets. Just after entering into the building, guests can spot on office on the right hand side with a sign saying that they will return shortly and the key is under the mat. Those who look to the floor and lift up the mat will sure enough spot the key!

The Rock ‘n’ Roller Coaster Starring Aerosmith on Sunset Boulevard is one of the most popular attractions in Disney’s Hollywood Studios. The attraction brings guests on a high speed adventure through the neon lights of Los Angeles to make it across town in time for backstage passes at an Aerosmith concert. Before entering into the preshow area of the attraction, guests can listen closely for a page that pays homage to a classic Beatles song. The page is looking for an employee named Jude, paying tribute to the classic “Hey Jude.”

2016-03-04
Caitlin Kane
Previous: 7 Reasons You Will Love Staying At Walt Disney World’s BoardWalk Inn
Next: 5 Things You Will Love about Tutto Gusto