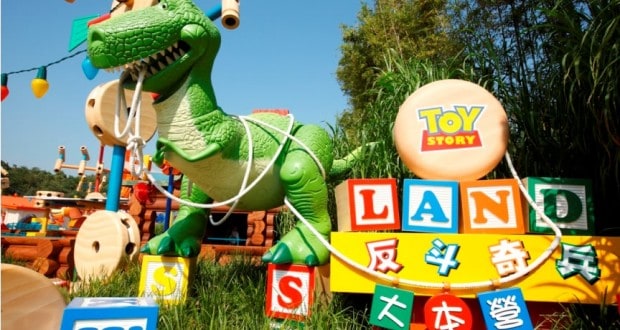 Every other summer, Disney lovers are treated to the ultimate fan experience via the D23 Expo which features exhibits, panels, discussions, meet and greets, and exclusive glimpses at upcoming and exciting projects. The 2015 D23 Expo was held at the Anaheim Convention Center from August 14-16 and fans attended in the thousands to check out memorabilia, purchase exclusive merchandise, mingle with Disney employees and Imagineers, and attend all types of different panels. Over the course of the weekend, Disney announced tons of exciting new projects which will be coming to Walt Disney World in the upcoming years. Here are the ten biggest announcements about Walt Disney World from the 2015 D23 Expo.

1.     Toy Story Land – One of the biggest announcement from the Expo is slotted to entertain guests at Disney’s Hollywood Studios. Toy Story Land will be based upon the beloved Pixar film and will take guests on an immersive journey. Guests enjoying the new area will shrink down to the size of a toy and be able to explore the world of Andy’s backyard. While the exact location of Toy Story Land in Disney’s Hollywood Studios is yet to be unveiled, it is a good guess that it will be installed near the preexisting Toy Story Mania which is currently being expanded to include a third track.

2.     Slinky Dog and Green Alien Attractions – Toy Story Land will expand upon Toy Story Mania with two brand new attractions taking guests into the world of Woody, Buzz, and friends. Guests will be able to enjoy a family friendly roller coaster along Slinky Dog’s back and a spinning saucer like attraction themed around the lovable little green aliens.

3.     Star Wars Land – Also announced as coming to Disney’s Hollywood Studios in the near future is a massive Star Wars Land based upon the characters and universe created by George Lucas. The Star Wars Land expansion will cover fourteen acres in the park, and while its location has also not been officially announced, it is likely to be installed near the preexisting Star Tours – The Adventure Continues. The new area will take guests into an immersive world that has never been seen before and include brand new attractions, shops, dining, and entertainment.

4.     The Millennium Falcon, Epic Battles, and New Scenes – Accompanying the Star Wars Land addition will be a brand new attraction which will allow guests to pilot the famous Millennium Falcon just like hero Han Solo. Guests will also be able to enjoy a new attraction which places them in the middle of a secret mission and epic battle between the First Order and the Resistance. In addition to the brand new experiences, Star Tours – The Adventure Continues will also gain several new scenes depicting the galaxies and characters that will be featured in the upcoming 2015 film Star Wars: The Force Awakens.

6.     Frozen Ever After and Summerhaus – While guests have known since the 2014 closing of Maelstrom in Epcot that a brand new Frozen attraction was in the works, new details were announced at the D23 Expo. The attraction will be titled Frozen Ever After and take guests into the fictional kingdom of Arendelle where the Winter in Summer Celebration is occurring. Guests will be treated to the characters and music that they love from the hit film and also delight in new scenes and collaborations. In addition to the attraction, Norway will gain the Royal Summerhaus cabin where guests will be able to meet Anna and Elsa.

7.     Soarin’ Around the World – Another exciting announcement made regarding Epcot is the update to the guest favorite attraction Soarin’. Currently guests who enjoy the attraction are treated to a hang gliding experience over the gorgeous sights of California. At the D23 Expo it was announced that in early 2016 the attraction would receive a new film and soundtrack that will take guests on a scenic tour of the world, showcasing the beauty of different countries and continents.

8.     Pandora – At the Expo it was also announced that Disney’s Animal Kingdom is going to experience its fair share of expansions and enhancements in the upcoming years. While guests have known for several years now that a collaboration was occurring between Walt Disney World and James Cameron to bring the fictional setting of Pandora from Avatar to life, new details were announced at the Expo. The land will officially be titled Pandora – The World of AVATAR and feature incredible landscapes including floating mountains. Guests will be treated to two new attractions, the first of which will take them on a serene boat ride through a bioluminescent jungle at night. The second attraction titled AVATAR Flight of Passage will offer the thrilling experience of flying high over the fictional world with banshees.

9.     Nighttime Safari – Disney’s Animal Kingdom is slated to receive several new forms of enhancements and entertainment to help entice guests to remain in the area after dark. Guests previously knew that a brand new nighttime spectacular titled Rivers of Light was coming but details were revealed describing the show as extending into the night sky and celebrating the beauty of animals. In addition to the nighttime show, guests will also be able to experience Kilimanjaro Safaris after dark when the savannah will be lit with an orange glow mimicking the beautiful light of a sunset.

10.  Jungle Navigation Co., Ltd. Skipper Canteen – For several months now there has been construction just off of the central hub in the Magic Kingdom on the Adventureland side. It was announced at the D23 Expo that the construction is for a brand new restaurant titled the Jungle Navigation Co., Ltd. Skipper Canteen based on the beloved nearby attraction the Jungle Cruise. The restaurant will feature several dining areas including a mess hall and former secret meeting room of the Society of Explorers and Adventurers and will be staffed by the comical Jungle Cruise skippers! Since construction has been ongoing, the restaurant is slated to open in late 2015.

2015-08-18
Caitlin Kane
Previous: Walt Disney World and Disneyland Announcement with with J.J. Abrams, Harrison Ford
Next: Soarin’ Around the World to Debut Next Year!