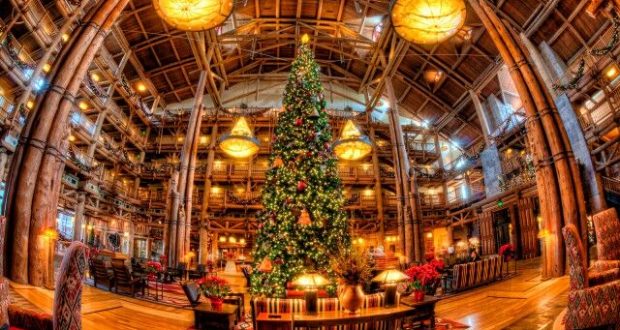 Walt Disney World Themed: “All I Want For Christmas Is…”

It seems like Christmas is always right around the corner. It’s a special time for Disney fans, whether or not you visit Walt Disney World during the holiday season. If you can’t make it to Florida, you can still decorate your tree with Disney ornaments, put on your favorite Goofy Christmas sweater, enjoy milk and cookies with your Minnie plate and glass set, and watch Mickey’s Christmas Carol with your loved ones. Here is my Disney Christmas wish list. Some are possible, and some, well, probably will never happen. A few are in between. What is on your Disney Christmas list? Feel free to add what you’re hoping for in the comments below.

Disney Gift Cards are a practical gift. You can use them online, in the shops and restaurants at Walt Disney World, and you can even use them to help pay off your vacation. They are also small, making them great stocking stuffers.

9) No Line for Avatar Flight of Passage

Avatar Flight of Passage is the most advanced ride at Walt Disney World, and it is also arguably the most popular, at least right now. The wait is usually well over an hour, and that is on days that aren’t all that crowded. FastPass+ disappears just minutes after the window opens 60 days in advance. A chance to ride Avatar Flight of Passage without having to wait would be a great Christmas gift.

The Walt Disney World website is extremely helpful and easy to use, except when there are glitches. Unfortunately, those glitches happen fairly often. As much as everyone loves Stitch, no one wants to see his face while trying to make FastPass+ reservations, or find a menu for a restaurant. A website without glitches would be a great gift that Disney could give to fans.

Most people underestimate the amount of walking that is done each day in a Disney theme park. The wrong shoes can ruin your trip. Shoes that are comfortable, won’t rub in weird places, and will not cause sweaty feet can be a great gift for someone who is planning a Walt Disney World vacation.

Everyone jokes that calories don’t count while on vacation, but unfortunately that isn’t really the case. It would be nice if Disney could somehow remove the fat and calories from some of their tastier treats. Disney is all about magic, but this is probably outside of even their magical realm.

5) The Return of Star Wars Weekends

The last Star Wars Weekend was held in 2015, and the celebration is missed. While it is true that Disney will hold Star Wars: Galactic Nights from time to time, guests are now expected to pay extra for something that was once included with park admission. With the construction there isn’t really enough room for a major five weekend event right now, but it would be nice if they would announce the return of Star Wars Weekends for 2019, once Star Wars: Galaxy’s Edge is open. That would be a great Christmas gift for fans of both Star Wars and Walt Disney World.

From time to time Disney will bring rare characters to the parks. World Photo Day has been celebrated on August 19 for the past couple of years as PhotoPass Day, which has given guests a chance to meet some rare characters. Character Palooza at Disney’s Hollywood Studios will sometimes give you the opportunity to meet more characters; if you can find it. There are also rare characters at both of Mickey’s parties. If Disney were to announce more events like PhotoPass Day so that guests would be able to meet rare characters, it would be a great Christmas surprise.

If you’ve been to Walt Disney World, you know how crowded the parks can get. Even on a day that isn’t peak it can be hard to get the perfect picture without a bunch of strangers in the background. There are also lines every day of the year. If you’d like to experience an almost empty park, there is a way. With Disney Early Morning Magic, on select days you can enter Fantasyland earlier than most other guests. You can ride Seven Dwarfs Mine Train, Peter Pan’s Flight, and the Many Adventures of Winnie the Pooh over and over again, until the park opens to the general public. There is also a breakfast feast included in the price. The best part of Disney Early Morning Magic is that the number of tickets sold is limited, so there won’t be a crowd. Purchase it for your next vacation, print the receipt, wrap it in a large box, and place it under your Christmas tree. Your family will love the experience.

What better place to enjoy Christmas dinner than at Walt Disney World’s most special restaurant? At Victoria & Albert’s there are three different dining experiences available, and any of them will make your holiday more special. Victoria & Albert’s is not only arguably the best restaurant at Walt Disney World, it is one of the best in the entire country. The food, atmosphere, and overall experience are that good. It would be the ultimate Christmas dinner.

1) A Night in Cinderella Castle Suite

It is fairly well known that there is a suite in Cinderella Castle. The space was originally saved for the Disney family, and now it’s used for VIPs. In the past there have been contests where guests could win a night in the suite, but those haven’t been held in years. The Cinderella Castle Suite is not included on tours, and most fans will never have a chance to see the inside. The opportunity to spend a night in the Cinderella Castle Suite would be the best Christmas present ever! Even spending an hour in the suite would make anyone’s holiday incredible.