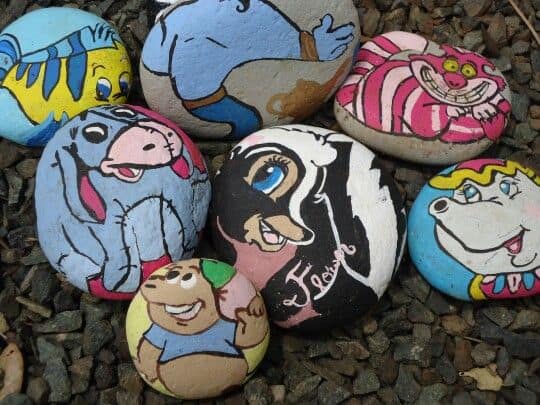 There is a craze right now that has hit many parts of the United States. People will paint rocks with a character or a logo on them, and then hide the rocks for others to find. There are groups on social media where the hider might post hints on where to find the rocks, but sometimes they are hidden just for fun. The problem is, this practice is not allowed at Walt Disney World. Rocks, painted or otherwise, are not supposed to be taken into the parks. There are two reasons for this. First, rocks can be used as weapons, and you don't know who will end up with them. You might think that the round rock that you painted as Mike Wazowski is the perfect keepsake, but the person who finds it might think that it's the perfect size for something more nefarious. Second, often the rocks are hidden in the landscaping, and Disney doesn't want that disturbed. Rocks are not listed as banned on any of the Disney Parks websites, but that's because Disney does consider them to fall under the "weapons" category. They might make the official banned list at a later date. If you're going through bag check and have rocks in your things, they will be confiscated.