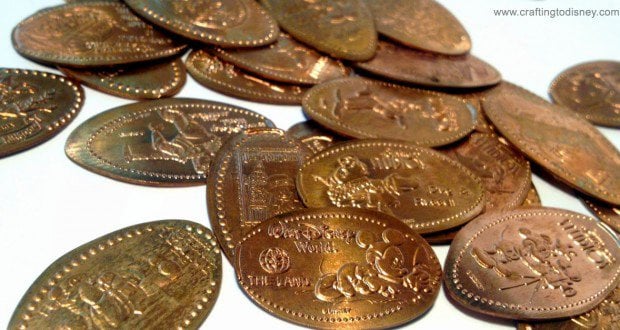 4) Pressed pennies and quarters -- These are not only fun to make—they’re also inexpensive and collectible. Throughout the parks, there are pressed penny and pressed quarter kiosks, often inside shops. Pressed pennies cost $0.51 each ($0.50 to press a penny plus the penny itself). Pressed quarters cost $1.25 each ($1.00 to press a quarter plus the quarter itself). Each kiosk offers different choices of images you can press onto a coin. Some images include the name of the park you’re visiting, while others include “Walt Disney World” and a favorite Disney character. Pressed coins make great souvenirs, and they aren’t costly. Note: When pressing pennies, try to use pennies that were minted in 1982 and earlier, as these pennies are all copper. Pennies minted in 1983 and later have zinc sandwiched between copper coatings, and the zinc often leaves streaks of silver once the penny is pressed. The all-copper pennies also hold the shape of the image better.