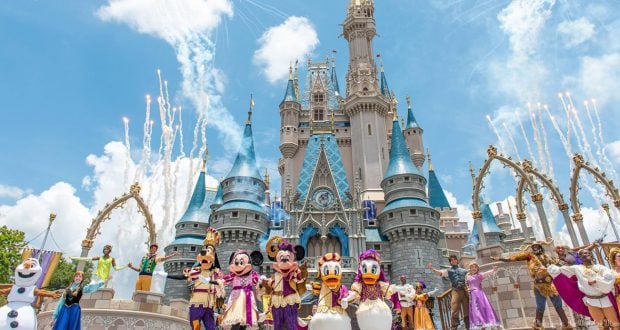 Disney World sees some 50 million Guests walk through its gates every year—20 million of those visit Magic Kingdom. It remains one of the most dreamed of and hoped for vacation destinations on Planet Earth. Composing a touring plan of the park is almost impossible unless you allow yourself three or four days at Magic Kingdom. There are endless choices for entertainment, whether it’s rides, stage shows, Walt’s classic attractions, character meet-and-greets or other experiences, and it will take even the most devoted Disney fan three to four days to fully experience a majority of the park—and you probably still will have items on your Magic Kingdom bucket list. With all there is to do, how do you choose which things to do first? Which shows should you not miss? Which attractions should you do on your first day at Magic Kingdom? The best idea is to create a plan that works for you and your family. Do some research before you visit the park and know which experiences your family hopes to have. To get you started, here are 10 experiences to have at Magic Kingdom so you truly get the Disney feeling and leave believing in the Magic like never before. Snow White fans unite! The Seven Dwarfs Mine Train opened to the public on May 28, 2014, and the queue has been bustling with Guests ever since. This family-friendly swaying coaster located in the heart of Fantasyland has Guests raving. It’s so magical that it has converted many coaster haters into coaster lovers! Scoring a FastPass+ time for the ride just after it opened proved difficult, and without one, Guests could expect to be in the stand-by queue for 90 to 200 minutes. Today, FastPass+ times are slightly easier to get, but during peak seasons in the park, those times go quickly, and Guests who wait until the week before their visit to book FastPass+ times will likely see this attraction listed under the “Unavailable Experiences” heading on the My Disney Experience app.

The Seven Dwarfs Mine Train is unique in that it offers Guests a 2-for-1 deal—it’s a thrill ride and a dark ride, combined into one experience. One part takes place on the outdoor tracks (hold on tight for that big drop and a whoosh behind the waterfall). And the other part of the ride takes Guests into the workplace of the Seven Dwarfs—a mine where “a million diamonds shine.” During this part of the ride, the mine carts move more slowly than they do during the rest of the ride, thanks to variable speed technology in the 20-passenger trains. This technology allows the ride vehicles to barrel down the mountainside and plummet into valleys, then race up the mountain again—then proceed into the Seven Dwarfs’ mine at a much slower speed. This is one experience that will have you coming back for more!

9) “Happily Ever After” nighttime spectacular Pandora Jewelry sponsors this exciting new nighttime show. Disney has described it as “the most spectacular fireworks showcase in Magic Kingdom history.” The number of lights, lasers and projections in this nighttime show is higher than any other nighttime spectacular since 1971 when the park opened. Find yourself taken away by the imagery projected onto Cinderella Castle. It takes the castle from beautiful Disney icon to Disney fairy tale storybook. Throughout the 18-minute show, stories are told from beloved Disney films, including Aladdin, Big Hero 6, Brave, Frozen, The Incredibles, The Lion King, Moana, Mulan, Toy Story, Up and more. You might be tired by the end of your day but be sure you stay for this presentation at least once. Only Disney could be known for exciting and beautiful restroom facilities. And that’s exactly what you see when you visit Fantasyland and “gotta go.” But now Guests have the opportunity for another experience inspired by Disney’s Tangled. In the evening, just across from those beautiful facilities, PhotoPass photographers are set up to take photographs of Guests individually and with their families. What’s the Tangled part of this? PhotoPass photographers have a special prop with them—a glowing lantern inspired by the kingdom’s yearly tradition. Guests can stand in line to have their photo taken while holding the lantern. The end result is a gorgeous, one-of-a-kind photograph Guests will cherish for years to come. It’s the first time this experience has been offered at Magic Kingdom. It’s not every day you get to go home with pictures of your family gathered around a brilliantly lit lantern against a background of the night sky. It’s a beautiful experience—whether you’re a Tangled fan or not! (Photo credit: Disney) Though Magic Kingdom is just shy of its 50th birthday, the fun is always new, always changing, always growing. Disney remains the leader in theme park entertainment, but if you miss the classic attractions that have been there since the park’s beginning and early years, you’ll miss something special. There’s something to be said for the classic attractions—those that were amazing then and amazing now, those attractions whose technology was highly advanced for that time period. There’s a Disney nostalgia you feel when you experience Peter Pan’s Flight, The Enchanted Tiki Room, It’s a Small World, The Haunted Mansion, The Hall of Presidents, The Jungle Cruise, Prince Charming’s Regal Carrousel, The Swiss Family Treehouse, Walt Disney World Railroad Station at Main Street U.S.A. and The Mad Tea Party, among others. Guests in the park often think that “older” means “outdated,” but nothing could be further from the truth. Each of the classic attraction tells a story—an incredible story only Disney could tell, and as you enjoy the experience of each attraction, you seem to have a better understanding for who Walt was, and how his genius and vision for the theme park of tomorrow continues to shape and grow the parks to this very day. (Photo credit: Disney)