DISNEY PARKS AT D23 EXPO 2017 - Saturday, July 15, 2017 - Walt Disney Parks and Resorts announced an extraordinary line-up of brand new attractions and experiences coming to its parks and resorts around the world at D23 Expo 2017 in Anaheim, California. The Ultimate Disney Fan Event - brings together all the worlds of Disney under one roof for three packed days of presentations, pavilions, experiences, concerts, sneak peeks, shopping, and more. The event, which takes place July 14-16 at the Anaheim Convention Center, provides fans with unprecedented access to Disney films, television, games, theme parks, and celebrities. (Disney/Image Group LA) 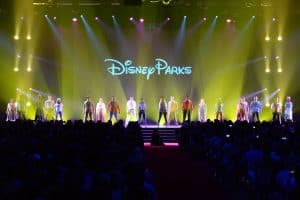