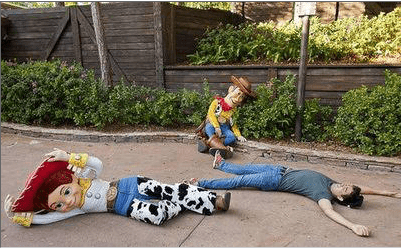 If you've seen any of the Toy Story movies, you no doubt remember that the toys would drop to the ground if a human was approaching. Often a toy would yell "Andy's coming" and everyone would immediately fall. It used to be the practice that the Toy Story characters would do that at the Disney parks, but it was discontinued for safety reasons. Remember that the Cast Members inside of the costumes have limited vision, and they could hurt themselves or others when falling. Also, the call started to happen so often that it would disrupt the meet and greets. Now if you yell "Andy's coming!" the characters will ignore you, and the character attendant will inform you that Andy is in college. Don't try it, no one will think it's funny. Enjoy the meet and greet instead.