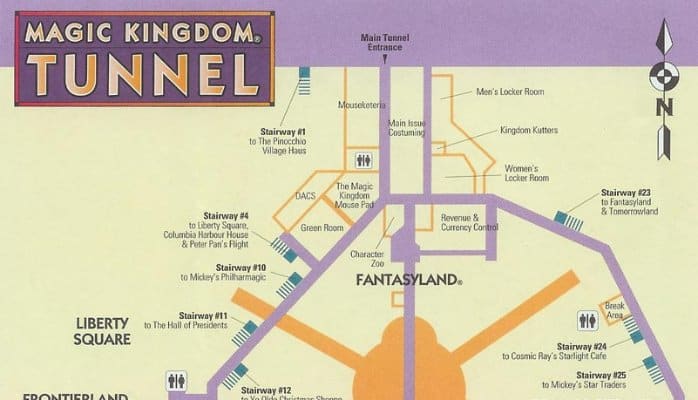 3) Utilidors The high water level in Central Florida makes it next to impossible to dig too deep without having a problem with water. Walt Disney did not want guests to see Cast Members traveling from one area of the park to another, thereby suspending their disbelief. The answer is quite clever, most of the Magic Kingdom is actually one or two stories above ground. Underneath, on what would be the first story, is a series of tunnels that are known as utilidors. These tunnels allow Cast Members to move easily from one land to another without being seen. The utilidors are also used to move merchandise to the correct area, and they are where the garbage from the park is taken and sorted into items that can and can't be recycled. Guests can sign up for a behind the scenes tour for an extra cost that will allow them to see what it looks like under the Magic Kingdom. There is an age limit for the tours. Disney does not want to risk that a young child will have his or her vacation ruined by seeing a favorite character's body with a human head.