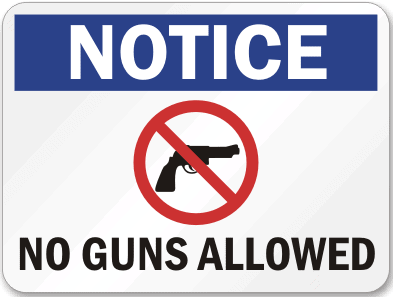 4) Guns Disney Parks has a no weapons policy at every theme park across the planet. The policy is so strict that even toy guns are not allowed, and they are not sold in the stores. That hasn't stopped people from trying to bring guns into the parks. In 2016, there were at least three arrests stemming from people with hidden guns. The first case took place in August. When a man from Arkansas was picked to go through the metal detector, he claimed that he was a police officer and that he had a firearm in his pocket. He was asked to produce credentials. It turned out that he had been a police officer at one time, but was fired three years earlier. He was arrested for carrying a concealed firearm, and for impersonating a law enforcement officer. In October there were two more arrests on the same day. One was a woman from Alabama, who claimed that she had a concealed weapons permit. The permit was expired, and she was arrested. The same day a man from Louisiana was picked to go through the metal detector. He informed security that he had a firearm on him. Since he didn't have a permit and the gun wasn't registered, he was arrested. It should be noted that none of those arrested had valid permits, which is what led to the arrests. Remember, though, that guns are not allowed on Disney property, even with a concealed weapons permit. (Photo credit: MyDoorSign.com)