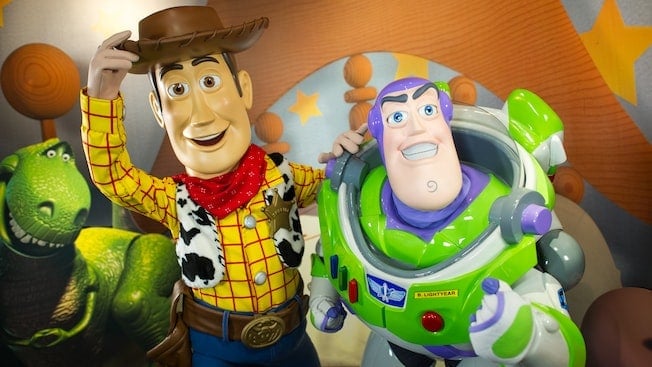 This character encounter is by far one of the most interactive of the opportunities to meet and greet characters. Guests can meet Woody and Buzz from Disney’s Toy Story at Pixar Place inside Disney’s Hollywood Studios. There are no FastPass+ times available for this encounter, but the wait is worth it. The queue winds back and forth inside the building, but this is no ordinary boring line. On the contrary, the queue is full of sets from Toy Story, each of which will have you feeling that you’ve shrunk down to the size of a toy. You can take pictures with family and friends at each set along the queue. One set includes the machine with “the claw” from which the green aliens came. Another set allows you to take a picture of friends and family as they appear to be strapped to one of Sid’s rockets, just like Woody and Buzz were in the first Toy Story movie. Yet another set allows you to step inside the packaging that the Prospector comes in as part of “Woody’s Round-Up” from Toy Story 2. At the end of the queue, of course, are Sheriff Woody and Buzz Lightyear. Their set looks like Andy’s room, and both Woody and Buzz interact with Guests, share laughs and pose for pictures. PhotoPass photographers are available at this character encounter so you don’t miss a minute of the fun, and your memories will last forever. If you’re a PIXAR fan at all, don’t miss this encounter! (Photo credit: Disney)