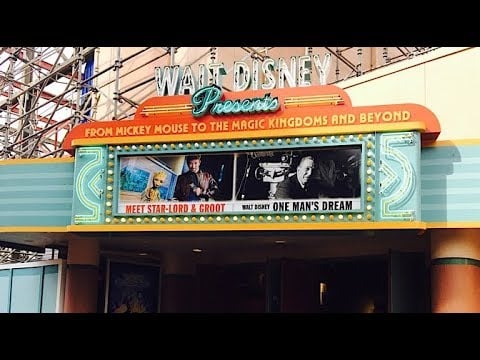 Don’t mistake this attraction for a placeholder or “filler” attraction. On the contrary, this fantastic exhibition allows Guests to enjoy a self-guided tour through the story of Walt Disney from his childhood to present-day, where “Disney” is a household name. For the Walt fanatic, this fabulous exhibit is a hallowed place and even if you aren’t a Walt fanatic, you just might become one after experiencing this attraction. See photographs, models and other items from Walt’s life and work, and witness his ingenuity in dazzling real-life artifacts, including a model of the brilliant multi-plane camera that he developed in 1936. You’ll see cells and lithographs from some of his earlier works. Take all the time you want as you stroll through the corridors dedicated to Walt’s greatness. Learn about the tiny sparks of Walt’s imagination that grew into Mickey Mouse, the first animated feature film, the live-action/animation mix and even Disneyland and Walt Disney World. Walt Disney Presents concludes with a theater screening of a short film about Disney’s life and the brilliant mind behind his works. There’s so much to see and learn in this attraction, so don’t miss your chance to have a greater understanding of who Walt was and how so much of his work influenced what we know today as “Disney.” (Photo credit: YouTube)