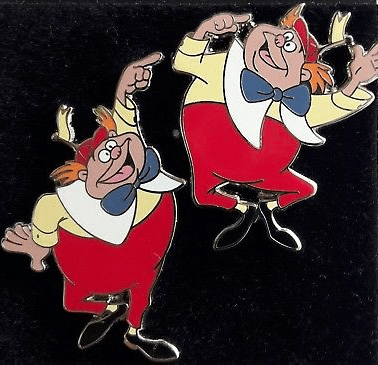 This is a rare 2-pin set of Official Disney Trading Pins. The set was originally released in 2010. One pin features Tweedle Dee and the other features Tweedle Dum, both from Disney’s Alice in Wonderland. The two pins feature the characters in their classic garb—red pants, pale yellow long-sleeved shirt, long white collar with blue bow, red hair and a red cap with a yellow flag on top of it. What makes these pins so rare is that they are part of the first release of this set, and each pin has a “FIRST RELEASE” imprint on the back.