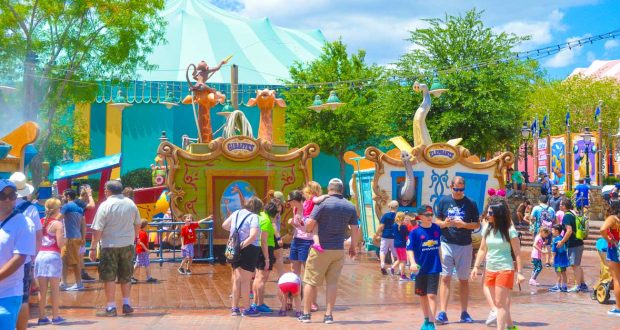 Guests who visit Walt Disney World love to spend lots of time exploring and enjoying the Magic Kingdom. The park opened with the Walt Disney World Resort in October 1971 and has been amazing guests ever since with several different lands, each uniquely themed with attractions, entertainment, dining, shopping, and more. Guests who spend time in the Magic Kingdom can blast off into space, meet some of the Disney Princesses, travel to the Wild West, set sail with pirates, hang out with ghosts, and battle the Evil Emperor Zurg. With so much to enjoy in the Magic Kingdom, part of what makes the part so amazing is the intense attention to detail in every area. Unbeknownst to many guests, there are hidden secrets and history found in these details that help to add a level of depth to the park. From Hidden Mickeys to safety features, there are plenty of hidden details and secrets in the park. Here are twelve amazing facts about Walt Disney World’s Magic Kingdom.

Cinderella Castle is one of the most recognizable structures in the world and it is located at the end of Main Street in the Magic Kingdom. The castle beckons guests to travel further into the park and enjoy all of the wonderful experiences found there. While Cinderella Castle might look like an authentic castle constructed out of stone or bricks, guests might be surprised to learn that neither material was used when building it! Instead, Cinderella Castle features fiberglass and steel designed to stand up to the hurricane winds that Central Florida can experience.

Walt Disney’s Enchanted Tiki Room in Adventureland invites guests into a theater in the round where above birds, tikis, and flowers serenade them with tropical songs. The exterior of the attraction is very impressive and features a large tower with several different levels all featuring thatched roofing. While the thatched roofing may look authentic, it is actually all metal making Walt Disney’s Enchanted Tiki Room a massive lightning rod designed to help keep guests safe during thunderstorms.

Pirates of the Caribbean is one of the most popular attractions in all of Walt Disney World and it brings guests on an adventure on the high seas. Guests who enjoy the attraction can travel through eerie caves, a raging seaside battle, and a burning town before finding Captain Jack Sparrow relaxing amongst his treasure. Above Captain Jack is a crest that reads Marco Daviso which might seem like a random name but actually pays tribute to Imagineer Marc Davis who helped to design the attraction.

Splash Mountain is a favorite attraction of many guests as it invites them to embark on a journey with Br’er Rabbit who sets off in search of more adventure. Along the way, guests can enjoy lively scenes with many animatronics and a thrilling final plunge into the Briar Patch below. In one scene, guests can see a series of gophers drop down out of the ceiling shouting out. The final gopher can be found wearing an orange t-shirt while yelling out FSU which stands for Florida State University where many of the Imagineers who helped to design the attraction attended school.

The Hall of Presidents in the Magic Kingdom’s Liberty Square invites guests to experience a distinctly patriotic experience that cannot be found anywhere else. The attraction shares the story of the executive office and features a grand finale with all of the presidents standing together on stage. The lobby of the Hall of Presidents features many artifacts and items that belonged to presidents as well as a roped off section of carpet. This section features the presidential seal which can only be found elsewhere in the Oval Office!

The Haunted Mansion is a favorite attraction of many guests in Walt Disney World and invites them into an eerie manor home where nine hundred and ninety nine happy haunts materialize to cause all sorts of mayhem. After enjoying the attraction, guests should look to their left on the exit path just before passing through the gate and entering back into Liberty Square. Up on the hill is a pet cemetery featuring the grave of Mr. Toad whose attraction Mr. Toad’s Wild Ride was replaced in Fantasyland by The Many Adventures of Winnie the Pooh.

It’s A Small World is considered to be one of the most iconic attractions in all of Walt Disney World and it can be found in the Magic Kingdom’s Fantasyland. Guests who enjoy the happiest cruise that ever sailed can enjoy many audio-animatronics singing the classic song of the same title from locations around the world. When approaching the band playing high above atop the elephant, guests should look for a purple vine whose leaves form classic Hidden Mickeys.

5. Toad in the Hundred Acre Wood

While many guests love The Many Adventures of Winnie the Pooh, many were also sad to see Mr. Toad’s Wild Ride leave. Guests who miss the incredible Mr. Toad can still find his likeness on the attraction. When passing through Owl’s treehouse, guests should look to the left hand side of their Hunny Pots to find a picture of Mr. Toad handing over the deed of the attraction to Owl.

Buzz Lightyear’s Space Ranger Spin invites guests to join Star Command and help them defeat the Evil Emperor Zurg. Guests are given laser cannons and take aim at many different targets to collect power from Zurg and score points along the way. While moving towards the loading area of the attraction, guests should be on the lookout for a planet named Pollust Prime. One of the planet’s land masses forms a Hidden Mickey!

Walt Disney’s Carousel of Progress brings guests on a journey through the century with one family to celebrate how progress and innovation have changed life over the years. The final scene of the attraction shows the family in modern times celebrating Christmas gathered around the tree. Guests who look to the back of the scene and to the right of the dining table will notice an abstract painting that depicts Sorcerer Mickey!