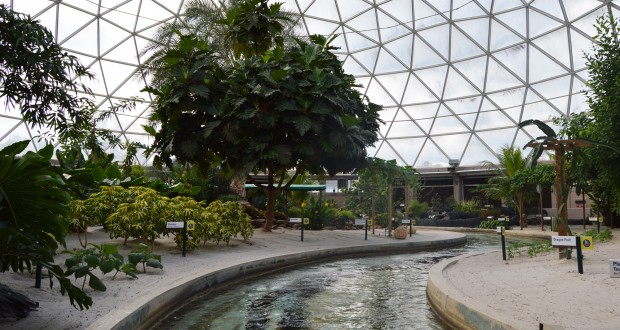 Of the four theme parks in Walt Disney World, many guests love to spend lots of time exploring and enjoying all that Epcot has to offer. The park is unique in that it is comprised to two distinct halves which come together to form a cohesive whole. The front of Epcot is home to Future World which celebrates the juxtaposition and union of nature and technology and the rear is home to World Showcase which features eleven different pavilions that each bring a country from around the world to life through details, architecture, entertainment, dining, shopping, culture, and more. With so much to see and do in Epcot, many guests move so quickly that they often overlook some of the most amazing details that help to bring the park to life. From Hidden Mickeys to cultural references, these details can’t be missed. Here are twelve amazing facts about Walt Disney World’s Epcot.

1. Living with the Land Hidden Mickey

The lower level of The Land Pavilion is home to Living with the Land, a serene boat tour which brings guests through different environments and greenhouses to showcase the beauty and diversity of the land. As guests move through the greenhouses, they should be on the lookout for a room that features aquatic tubes on both sides. One of the tubes features a Hidden Mickey made out of mesh wiring.

2. Living with the Land Lettuce Art

Also found in the greenhouses of Living with the Land are four massive tables that can be found growing heads of lettuce using hydroponic technology. Two tables of lettuce can be seen on either side of the boat and they are planted to grow to form the logo of Epcot and a massive Hidden Mickey.

3. Soarin’ Around the World’s Flight Number

Also found on the lower level of The Land Pavilion is a very popular attraction that has guests take to the skies. Soarin’ Around the World invites guests on a hang gliding adventure over some of the most beautiful locations in the world including the Great Wall of China, Sydney Harbor, Mount Kilimanjaro, Monument Valley, and the Taj Mahal. Guests might think that the flight number of Soarin’ Around the World is random, but the number 5505 actually pays tribute to when the attraction opened on May 5, 2005.

Just around the corner from the Character Spot and facing the walkway towards the Imagination Pavilion is a set of double doors that leads into part of the central building found in Epcot. Inside those doors are a section of often quiet bathrooms and tables as well as a lengthy timeline along the wall that spells out all of the interesting details and changes that have happened to Epcot since it opened in 1982.

One of the most recognizable attractions in all of Walt Disney World is Spaceship Earth in Epcot. The massive attraction brings guests on a journey from the beginning of time to modern day to celebrate the history of communication. As guests move through the scene depicting the Renaissance, they should look to the left hand side of their attraction vehicle where a table filled with paint supplies can be found. On the table is a classic Hidden Mickey formed by three paint rings.

While Spaceship Earth is truly massive, many guests might not realize how incredibly massive the aquarium tank in The Seas with Nemo and Friends is. In fact, the aquarium is so large that Spaceship Earth could easily fit inside of it! The massive size of The Seas with Nemo and Friends allows for many different types of marine species to exist there for guests to learn about.

In the plaza found just behind Spaceship Earth, there is a large fountain which occasionally features dancing water timed to beautiful music. The Fountain of Nations truly is a body of water featuring all nations, a detail which many guests don’t know. When the Fountain of Nations was dedicated, many different individuals from around the world came to Epcot with water from natural water formations in the countries and added them to the fountain. This small detail truly makes the Fountain of Nations a representation of the entire world.

The China Pavilion is home to the delicious Nine Dragons Restaurant which features an intricate design on the exterior. The roof of the restaurant is covered with ornate details including a man being guarded by a succession of animals on one of the corners. The man is supposed to be Prince Min, an ancient emperor who was hung for his cruelty. His representation remains as a warning against cruelty and the animals are there to ensure that he will never escape.

The Germany Pavilion also features a unique cultural reference in the center of its location. The large fountain in the middle of the square is topped with a statue of a knight fending off a dragon. The man represents Saint George who protected a king’s daughter from a dragon. Many German villages feature a likeness of Saint George for protection, and the Germany Pavilion in Epcot is no exception.

The American Adventure in the America Pavilion is housed in a beautiful colonial style building with brick exterior, bright white trim, and traditional architecture. While the building looks three stories tall, it is actually a trick of forced perspective which features the details on a building becoming gradually smaller as they reach the top to force the eye to think that the building is taller than it actually is.

Each night World Showcase Lagoon features Illuminations: Reflections of Earth which features beautiful twinkle lights in all of the pavilions of World Showcase except one. Morocco remains dark throughout the nightly show as a nod of respect to the Moroccan culture and ruler.

The Canada Pavilion in World Showcase features a trio of totem poles which are traditionally found in the northwest territories of the country. Two of the totem poles are authentic and have incredible detail, and the third was crafted by Disney and is slightly more cartoonish than the other two. The Disney totem pole also features a Hidden Mickey near the top.