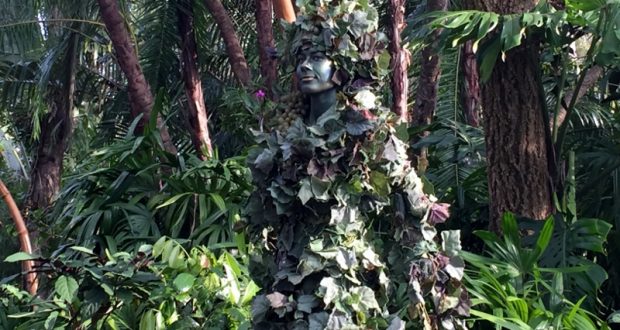 Guests who spend time in Walt Disney World love to explore the four amazing theme parks that are filled with attractions, entertainment, shopping, dining, and more. The newest of the four theme parks is Disney’s Animal Kingdom which invites guests to enjoy the beauty and diversity of nature while teaching them all about the importance of conservation and preservation. Guests who spend time in the park can travel back to prehistoric times, shrink to the size of bugs, go white water rafting, and embark on an African safari. With so much to enjoy in Disney’s Animal Kingdom, it is the details that bring the park to life and many guests overlook some of the most amazing facts and details that add so much depth to the story. Here are twelve amazing facts about Walt Disney World’s Animal Kingdom.

The icon of Disney’s Animal Kingdom is the massive and beautiful Tree of Life. The tree stands many stories high and features thousands of vibrant green leaves and a gorgeous trunk covered in intricately carved animals. While the Tree of Life is a symbol of the environment, guests might be surprised to learn that its inner support is an oil rig turned upside down. This was the perfect shape for a support as it left enough room at the base of the Tree of Life for the theater that houses It’s Tough To Be A Bug.

Near the entrance into the theater’s lobby for It’s Tough To Be A Bug, there is a photo opportunity with a very intricately carved gorilla accompanied by a plaque. The gorilla is David Greybeard who was studied for many years by renowned scientist Jane Goodall. The inscription with the carving explains their relationship and his importance in understanding more about the species.

Kilimanjaro Safaris is one of the most popular attractions in Disney’s Animal Kingdom and can be found in the heart of Harambe village in the middle of Africa. The attraction brings guests on a beautiful safari that features animals like lions, cheetahs, elephants, giraffes, and more. The original version of Kilimanjaro Safaris used to involve a storyline where guests helped to rescue Little Red the elephant from poachers. Little Red no longer is a part of the story, but she can be seen in a photo on the attraction’s queue.

The village of Harambe also features many wonderful details that help to bring the location to life. Guests night spot a sign that reads “JORODI Masks & Beads.” While the sign may seem random, it pays tribute to Joe Rhode, the Imagineer who was the driving force behind the conceptualization and realization of Disney’s Animal Kingdom.

While walking on the pathway that connects the Africa and Asia sections of Disney’s Animal Kingdom, guests might be surprised to find a bit of nature that literally comes to life! DiVine is a beautiful performer who wanders around on stilts and is made up to look like a living vine. Covered in lush foliage and vegetation, many guests walk right pats her as she often blends right in!

Kali River Rapids in the Asia section of the park teaches guests about the importance of preserving forests while also leaving them completely soaked. Just after heading up the large lift hill, guests should look for a large rock formation that comes together to form a roaring tiger!

Also located in the Asia section of Disney’s Animal Kingdom is an attraction that brings guests face to face with the fabled Yeti. While moving through the queue of Expedition Everest, guests pass through a museum dedicated to proving the Yeti’s existence. Guests can spot a classic Hidden Mickey formed by uniquely shaped ears on a photo of a bear.

Also found in the queue of Expedition Everest is a room filled with various types of supplies that climbers might need before ascending to the summit of the Forbidden Mountain. Those who peer inside one of the cabinets can spot the uniquely named blend Ye-tea!

Dinoland brings guests into all things dinosaurs including the interactive Boneyard where smaller guests can play. The area features plenty of things to climb on as well as lots of sand to dig for fossils in. The main sign for the Boneyard might look like an authentic dinosaur bone, but it is actually a map of Disney’s Animal Kingdom and guests can even spot the directional symbol for north on it!

Part of Dinoland is home to Chester & Hester’s Din-O-Rama which features carnival like games and several attractions. Designed to look like a roadside attraction, the area is also home to plenty of roads that look like real asphalt. In fact, the asphalt is actually concrete designed to look different, since the other material would melt in the hot Central Florida sun.

Dinosaur in Dinoland is a thrilling attraction that brings guests back to prehistoric times dangerously close to the impact of a massive asteroid. While waiting at the seatbelt checkpoint of the attraction, guests should look for a series of letters spray painted on the wall. The letters read SECTOR CTX-WDI-AK98 which stands for the attraction’s original name of Countdown to Extinction, Walt Disney Imagineering, and Disney’s Animal Kingdom which opened in 1998.

Also found in the queue of Dinosaur are a trio of red, yellow, and white pipes with complicated chemical formulas on them. These pipes remain from when the attraction was originally sponsored by McDonald’s and actually represent ketchup, mustard, and mayonnaise!