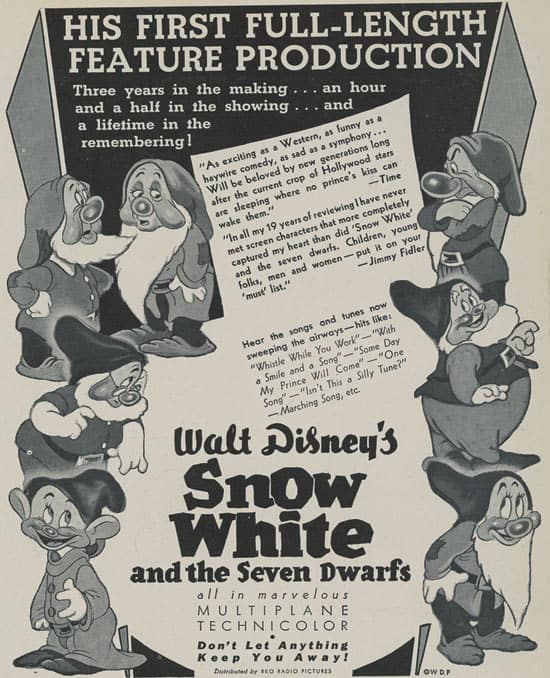 5. He had little support on the project that would serve as the Disney Company’s springboard.

After the success of Mickey began to take off, Walt wanted to branch out from the shorts he was used to producing and instead work on a feature-length animated film. He began work to give new life to an old German fairy tale written by the Brothers Grimm in 1812, titled “Sneewittchen.”

But Disney was met with critics and skepticism at his idea of such an undertaking. Investors didn’t take him seriously. Many of them thought it would be a financial disaster, and they were sure they’d never see a return on their investment. To their surprise and to Walt’s credit, Snow White and the Seven Dwarfs was released on December 21, 1937, and it was anything but a flop. In fact, it would go on to gross over $66 million. (Years later, it would be re-released, with the same kind of success, bringing its lifetime gross to over $184 million. Not bad for a film with a tiny budget of only $1.5 million!)

With the wild success of Snow White and the Seven Dwarfs under his belt, Walt had a whole new mindset. The feature film would prove to be both a huge milestone for Disney and his company, as well as a springboard for the future of the Disney Company as an entertainment giant.