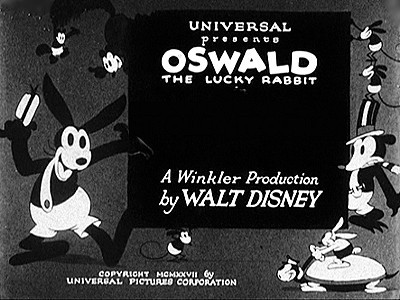 “I only hope we never lose sight of one thing—that it all started with a mouse.” Disney spoke these words on October 27, 1954, during a television program entitled, What is Disneyland? His words would serve as the motto and motivation behind the endeavors of the Walt Disney Company then and for all time to come. But truth be told, it all started with a rabbit—and a lucky one at that. Though he had drawn for most of his life, and even sold some of his drawings when he was younger, it was a little rabbit named Oswald that would change things for Walt.

Before Disney ever created Oswald, he was busy working with animator Ub Iwerks and producer and director Charles Mintz. The trio had worked on a series of cartoons called “The Alice Comedies,” which highlighted a live-action character against an animated background, much like the technique used in Who Framed Roger Rabbit? They produced 56 of these shorts in all. But Disney wanted to do something different, and he was discouraged by the costs associated with the shorts.

During this time, Universal had decided to get back into animation, but the company was looking for something different as well—a new character—one different from all of the animated cats that were featured in animation at the time. Disney submitted to Universal drawings of a new character wholly dreamed up and created by Disney alone—a rabbit named Oswald. Oswald the Lucky Rabbit, to be exact. Mintz struck a deal with Universal that included Disney and Iwerks, and they agreed to produce 26 animated shorts featuring Oswald. Though the famous bunny went through some changes in the next few months, by the end of 1927, merchandise featuring Oswald the Lucky Rabbit began to be manufactured and sold, and the Oswald shorts would become some of the most popular cartoons of the 1920s.