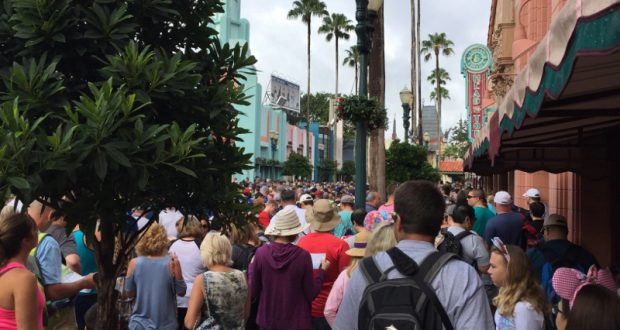 If you need a break from the crowds, head into one of the shops for a little while. You can find Star Wars, Indiana Jones, Toy Story, and Frozen merchandise, as well as other treasures. There are shops based on two of the biggest thrill rides at Walt Disney World, Disney Junior items, and plenty of hidden gems. If you find something that you want, you can have it sent to the front of the park so you won’t have to carry it with you all day. Just pick it up when you leave.

9) Leave for a Little While

If you feel like the construction walls at Disney’s Hollywood Studios are closing in on you, leave for a little while. You can easily take a Friendship boat or the walking trail to Disney’s BoardWalk. There you can enjoy unique ice cream flavors, try some delicious baked goods, or rent a surrey bike. After your break, walk or take a Friendship back to the park.

There are some great live shows based on classics at Disney’s Hollywood Studios. The theaters are large, so even if you don’t have a FastPass+ there is a good chance that you will get a seat. You’ll have a chance to sit down for a little while, and you’ll enjoy some fantastic entertainment.

You don’t have to be a huge Star Wars fan in order to enjoy Star Wars Launch Bay. It helps to have some knowledge of the saga, but you don’t need to be an expert. Launch Bay is great because you can take your time. You can see replicas of props, put yourself into a scene from the movies, and get some great character pictures. There is also a movie about the making of the franchise that you can watch or skip. The gift shop has some unique items that you won’t find elsewhere. Take as much time as you want in Launch Bay and soak up the air conditioning as well as the atmosphere.

The full service restaurants at Disney’s Hollywood Studios run the gamut from whimsical to elegant. Look over the descriptions of each one, and make a reservation for your first choice as soon as you are able. If you can’t make a reservation, you can find a lounge next to both 50’s Prime Time Cafe and The Hollywood Brown Derby. With a lounge you can still try some of the delicious food, but you won’t need a reservation.

There are plenty of characters to be found at Disney’s Hollywood Studios, but you might need to look for them. You can find characters from Toy Story, Star Wars, Disney Junior, and more. There are classic characters, and you can receive a warm hug from Olaf. Check inside Walt Disney Presents for another meet and greet area, based on a recent hit movie. If you’re lucky, you might happen upon Character Palooza. It’s a secret meet and greet that sometimes takes place in the afternoon. It features a few characters from Fantasmic!. Character Palooza changes characters, locations, and times, and it is so secret that Cast Members will tell you that it does not exist. It does.

At Disney’s Hollywood Studios, FastPass+ is in tiers. You are allowed one choice from Tier One and two choices from Tier Two. It is Tier One that is tricky, because both Rock ‘n’ Roller Coaster Starring Aerosmith and Toy Story Mania! are Tier One attractions. Grab the one that is more important to you, and then get in line for the other as soon as the park opens for the day. When making Tier Two choices, skip Muppet*Vision 3D. The theater is huge, and there is usually little or no wait.

You’ve hit all the rides and watched the shows, so you can go back to the hotel, right? Wrong, because you haven’t experienced everything. Disney’s Hollywood Studios is home to two incredible nighttime experiences. Fantasmic! is a live show that will take you into Mickey’s dream. There are characters, water screens, lasers, and much more. Star Wars: A Galactic Spectacular features fireworks, projections, special effects, and the classic score by the legendary John Williams. If you visit during the Christmas season Jingle Bell, Jingle BAM! could replace Star Wars: A Galactic Spectacular. You won’t want to miss that either.

The FastPass+ situation makes arriving early at Disney’s Hollywood Studios a necessity. The lines for Toy Story Mania! and Rock ‘n’ Roller Coaster will both grow long as the day goes on, so be at the park at rope drop and get in line immediately. Arriving early will also allow you a chance to ride Star Tours – The Adventures Continue without much of a line. Since the ride has over 50 possible combinations, you will want to hit it more than once.

1) Dream About the Future

If you feel crowded at Disney’s Hollywood Studios because of the construction walls, don’t complain. Instead, think about what the future holds. There are two new lands on the way, as well as a ride based on Mickey and Minnie. If you want to have a better picture of what is on the way, stop by Walt Disney Presents (formerly Walt Disney: One Man’s Dream). There is a model of all of Toy Story Land, and another model of part of Star Wars: Galaxy’s Edge. There is also information on Mickey & Minnie’s Runaway Railway. While you’re inside Walt Disney Presents, spend some time looking over the other exhibits. You will learn a little bit about the fascinating man who started it all.