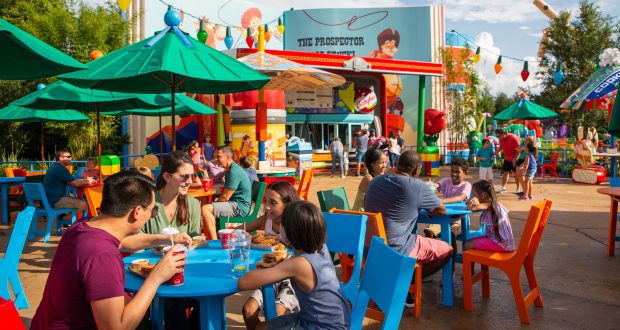 Disney’s Hollywood Studios has always been known for thrill rides, but for a while it was considered by some to be a half day park. That all changed with the opening of Toy Story Land. Since guests have been invited into Andy’s Backyard crowds have been flocking to the park. More additions are on the way for 2019. Here are ten ways to survive the crowds at Disney’s Hollywood Studios. They are loosely in the order that you should do them.

Two of the most whimsical full service restaurants at Walt Disney World are found at Disney’s Hollywood Studios. There is also fine dining and a unique character experience. You can make dining reservations 180 days in advance, so make your reservation well ahead of time. You can always cancel if your plans change. FastPass+ is essential at Disney’s Hollywood Studios. You can pick one of the three rides in Toy Story Land, and two other rides or shows. Try to get Slinky Dog Dash if it’s available. The ability to make FastPass+ reservations 60 days in advance instead of 30 is reason enough to stay at a Walt Disney World resort hotel! For your Tier Two choices you’ll want Rock ‘n’ Roller Coaster if you’re into thrill rides. You can’t go wrong with Tower of Terror either. If you want to try to hit as many combinations as possible on Star Tours – The Adventures Continue, use one FastPass+ for that instead of Tower of Terror.

The crowds at any park are lightest first thing in the morning. There are also plenty of people who won’t make it until the end of the day. Plan to arrive before rope drop and stay until the end of the night. If you’re worried about getting tired, head back to your hotel in the middle of the day and take a nap.

7) Get in Line Immediately for Non-FastPass+ Ride

When they open the gates, head immediately to a ride that you did not get FastPass+ for. If you weren’t lucky enough to snag Slinky Dog Dash, that should be your first stop. Some people will pick Alien Swirling Saucers, and there is nothing wrong with that. Just pick a ride ahead of time, know where you want to head, and get in line. Throughout the day you’ll want to keep an eye on the My Disney Experience App or the map to see where the characters could be located. Star Wars characters can be found inside Launch Bay, and you’ll pass the Disney Junior characters on the way there. Mickey and Minnie greet indoors near ABC Commissary. There are other characters scattered around as well. The locations for characters change from time to time, which is why it’s not a bad idea to keep checking the app and also keep your eyes open. If you’re lucky, you might stumble upon Character Palooza. It’s a character greeting with various characters that is so secret that Cast Members will tell you that it does not exist.

Woody’s Lunch Box is a fun place to grab a meal, with creative breakfast offerings such as S’more French Toast Sandwich, and “Totchos” (tater tot nachos) the rest of the day. The problem is that there isn’t a lot of shade or seating near the counter service restaurant. Plan to eat at a non-traditional meal time so that you’ll have a better chance of grabbing a table. 4) Watch Shows in the Middle of the Day

There are some fantastic entertainment options at Disney’s Hollywood Studios. Plan to watch the shows in the middle of the day, when you need a break. Some shows are indoors and air conditioned, and you can sit down for most of them. Shows are a great way for a large amount of people to all be able to do something at the same time. They are perfect for crowded days, plus they’re entertaining.

Toy Story Mania! is no longer an impossible FastPass+ option, and the line is much more manageable than in the past. Unlike the other two rides in Toy Story Land, the wait is indoors. There are some fun picture opportunities along the way, and you’ll feel like you’re walking through your childhood. If you’re a fan of walls, have your camera ready after the ride is over as well.

2) Ride Alien Swirling Saucers After the Sun Goes Down

If you haven’t already ridden Alien Swirling Saucers, do it after the sun goes down. The line is sometimes a bit shorter later in the day, and you won’t be waiting in the sun. You’ll want to see Toy Story Land after dark anyway, so you might as well get in line. 1) Pick a Nighttime Show and Stick With It

It is next to impossible to be able to see all of both Fantasmic! and Star Wars: A Galactic Spectacular. If it’s crowded enough that there are two Fantasmic! shows scheduled then you might be able to do it, but don’t count on it. Instead, pick which one is more important to you, and grab a good spot early. Fantasmic! has plenty of seating but the theater does fill up fast. Star Wars: A Galactic Spectacular can be seen along Hollywood Boulevard, but the street will fill up well in advance. If you pick Star Wars: A Galactic Spectacular and find a spot at least 20 minutes in advance there’s a good chance that you’ll also be able to watch the projections show Disney Movie Magic. Fantasmic! is filled with all of your favorite Disney characters. Depending on the schedule you might be able to catch part of both, but it’s better to make the decision ahead of time of which one you want to enjoy and just stick with your choice. Both shows are incredible, so you won’t go wrong.